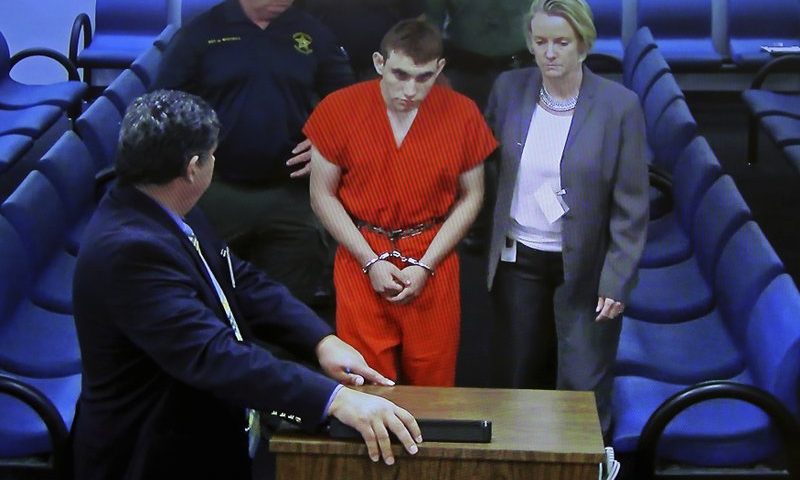 Dear Father, Nikolas Cruz, 19, was arrested on February 14, 2018 for the shooting deaths of 14 students and 3 staff members at the Marjory Douglas High School in Parkland, FL. Our judicial system provides each accused person with a defense attorney, at taxpayer expense if necessary, to make sure that a defendant’s rights are not violated. The Broward County court appointed Melisa McNeill and Gordon Weekes to serve as Mr. Cruz’s defense counsel. Mr. Cruz was brought before the court on February 15 for a bond trial. During his court appearance, Melisa was seen with her arm around the defendant, comforting him. Many consider Melisa’s actions inappropriate, given the extreme suffering the families of Mr. Cruz’s victims are experiencing. However, Melisa and Gordon have shared that it is their assessment, from interviewing Mr. Cruz, that he was deeply remorseful for his actions and that he has had misfortunes in life that warrant some measure of compassion. Father, the crimes that Mr. Cruz has confessed to are horrific. We once again ask for Your mercy and grace on each person who grieves the loss of a loved one. We ask for You to comfort those whose loved one’s are in the hospital, clinging to life. We ask that not one more person will die from this atrocity. However, if we cannot find within ourselves the capacity for forgiveness and grace, we become people of hate ourselves. The bitterness in our hearts can become as great as the bitterness of those who pull the triggers. Father, it is for this reason that I thank You for Melisa’s public embrace of Mr. Cruz. Melisa demonstrated that the hope our nation has to end violence is not to ratchet up hatred and bitterness but to search for opportunities to love even the most unlovable people in our society. Father, nobody envies the job they must do to defend the legal rights of the murderer of 17 innocent people. I am sure it is not easy for them at all. Melisa has shared that she too is a mother of children and she understands the grief the victim’s families are experiencing. Father, I ask for Your blessings on both Melisa and Gordon. Give them wisdom, insight, understanding, patience, self-control, grace, and mercy as they must defend an individual who is now hated internationally. Protect them from those who lack compassion and from those who believe due process should be suspended for this heinous crime. Protect them from the critics who would prefer public defenders to join the prosecution team. Protect their careers, their families, and their emotional and spiritual well-being. Father, I ask that this experience will lead both Melisa and Gordon into a deeper relationship with You. Amen.

Dear Father, Markus Schairer, 30, is an Austrian snowboarder. He lost control while on a jump during the 2018 Winter Olympics men’s snowboard cross quarterfinals competition and landed flat on his back. It has been reported that he broke the fifth cervical vertebra in his neck during the landing. After lying on the snow for a few minutes, Mr. Schairer was able to get up and finish his run. Father, You saved him from paralysis. Many people have died or have become paralyzed from similar injuries. I ask that You give Mr. Schairer complete healing of his neck. However, I also ask that You use this moment to spiritually awaken him. Capture his attention and may he hear Your voice calling him into a personal relationship with You. You decided to show him great mercy and it leaves me wondering why – what do You have planned for his life? Father, make it happen. May You one day say to him “Well done, Markus. Enter into my gates with joy.” Amen.

Dear Father, Cyril Ramaphosa was sworn into office yesterday as the new President of South Africa. This comes one week after his predecessor, Jacob Zuma, was forced to resign. Mr. Ramaphosa is a business tycoon who is one of Africa’s wealthiest individuals. He now leads a country where most of the population struggle with poverty. Mr. Ramaphosa has promised to defeat corruption and to address the economic inequalities that enrage millions of citizens. In his youth, Cyril served 11 months in solitary confinement for protesting against the government. He was praised for his calm leadership of trade unions in South Africa. This led to his involvement with Nelson Mandela and the African National Congress. It is said that Cyril was a key player in the transition from apartheid to democracy. However, he was passed over for leadership of the ANC after Mandela’s death. He returned to the business world and prospered in the mining, finance, beverage, and hospitality industries. His success in business, with a fortune estimated around $ 500 million, led him back into politics where he became a leader in the ANC and the deputy president, the heir apparent to the South African presidency. Former President Jacob Zuma was charged and acquitted of rape. He has also been charged with racketeering and corruption. These charges led to his resignation on February 14, 2018, opening the door for Mr. Ramaphosa to rise to the presidency. It has been reported that it was Mr. Ramaphosa, who has stated his desire to fight corruption, who pushed Mr. Zuma to resign. Father, first of all, I pray for the man. Lead Cyril into a personal relationship with You. Make him aware of his spiritual need and may he find spiritual rebirth and renewal in Christ. I ask that You give him wisdom as he leads South Africa. Give him counselors and advisors that encourage him to pray for understanding and direction. Give him the passion, the plan, and the resources to end corruption and to bring permanent relief to the poor in his nation. Second, I pray for the nation of South Africa.  I pray that this new administration will usher into the nation a spiritual revival and may Your church touch lives and lead people to faith in every town in the country.  Amen.

Dear Father, it has been reported that an anonymous 30-year-old transgender woman from New York has successfully breastfed a baby. The patient, who apparently has not had sex reassignment surgery, has been on feminizing hormones since 2011. The patient has received domperidone, progesterone, and estradiol to induce lactation. It has been reported that the patient’s lactated milk was the newborn child’s only source of nourishment for the first 6 weeks of life. The baby is said to be healthy. Father, I ask for two things in response to this news report. First, lead whomever this transgender woman is to salvation in Christ. They need forgiveness from sin and rebellion from God just like everyone else. Orchestrate events in this person’s life so that they one day share their testimony of the amazing love and forgiveness of Jesus Christ. Second, I pray for this newborn baby. Father, it is not everyday that a child is asked to grow up with the knowledge that they were breastfed by a transgender parent. It can be inferred from this report that the patient has a partner who is the biological mother of the baby. This means the baby will be asked to accept and embrace either two feminine parents, without a traditional father figure in the home, or a father and mother, neither of whom were born of the gender they are now presenting. Political correctness aside, we can all agree that the baby will be asked to come to terms with a family dynamic most children do not have to deal with. Therefore, I ask for Your mercy and grace on this child. Help the baby to become physically and emotionally healthy and stable. Provide the child with the parenting he or she needs to become a godly man or woman. I ask that the child will embrace the gender of their birth throughout their lifetime. I ask that the child will enjoy the transforming love of God and that the child will lead many to faith in You. Amen.