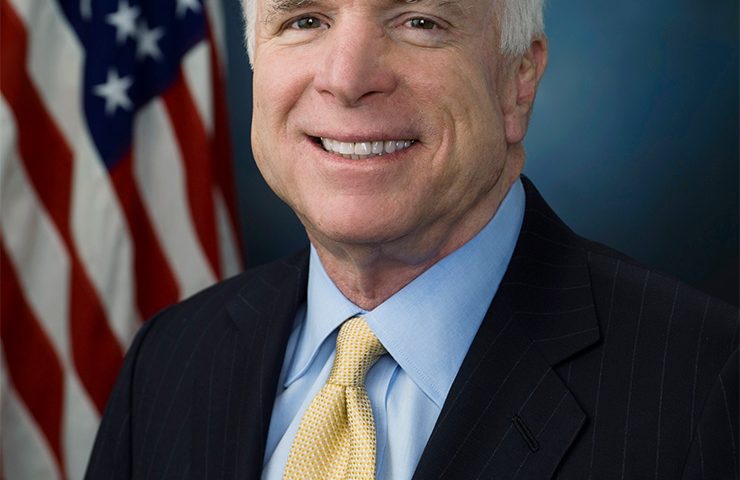 Dear Father, two people were killed and eleven were injured at an eSports Madden NFL 19 qualifying tournament in Jacksonville, FL. David Katz, 24, of Baltimore, MD, allegedly sought vengeance on other gamers after he lost in the competition at the GLHF Game Bar in Jacksonville Landing. He committed suicide after the atrocity.  Father, I lift up to Your care the families of the deceased.  Turn this evil into a blessing in their lives.  Overwhelm them with Your comfort, kindness, mercy, and compassion.  Transform lives.  Write new testimonies that will inspire others to place their faith in You.  Heal those who were injured.  Give them the best of care.  May this experience cause them, and their loved ones, to consider anew Your goodness.  Lead them to Yourself. Amen.

Dear Father, Arizona Senator John McCain has passed away at the age of 81. John was the grandson and son of four-star Navy admirals. He resented family pressure to go into the Navy, rebelling from authority and academics during his time at the U.S. Naval Academy. He was a naval aviator whose plane was inadvertently hit by the missile of another U.S. plane on the U.S.S. Forrestal. An explosion occurred on the deck. The infamous July 1967 incident cost the lives of 134 men. Less than three months later, on October 26, 1967, McCain was shot down by a surface-to-air missile by the North Vietnamese. McCain broke both of his arms and shattered his right knee as he ejected from the plane, subsequently falling into a lake. The North Vietnamese rescued him from the water only to torture him over the next five years. John was known as a leader among the U.S. prisoners. However, after two years of solitary confinement, McCain eventually confessed to war crimes and air piracy. He would later state that “every man has his breaking point.” Upon release from prison on March 14, 1973, McCain returned to the America and became an executive with a family-owned beer distributor. He served as a Republican member of the U.S. House of Representatives from 1983-1987. He began service as a U.S. Senator in January of 1987, a position he continued to hold until his death. McCain became a powerful political leader through the last three decades, building a reputation as a “maverick” who voted at times with liberals and at other times with conservatives. McCain alienated many conservatives who considered him a “rhino” (Republican in name only). As the Republican nominee for President of the United States in 2008, McCain chose Sarah Palin, the first female to be on a Republican presidential ticket, as his vice president running mate. Barack Obama won the election, returning McCain to his role as a Senator. President Trump and McCain had a public feud in the past few years. Trump dismissed McCain’s status as a Vietnam hero and McCain declared Trump as unfit for office. However, overall McCain did support Trump’s agenda. McCain was diagnosed with a brain tumor in 2017, a tumor that took his life this past weekend. Politicians from both sides of the aisle are mourning his passing. His body will lie in state in the rotunda of the U.S. Capital on August 31, 2018, a privilege given to very few Americans.  Father, comfort those who mourn his passing.  May they turn to You in this season of grief.  Open their eyes and may they see Your goodness, compassion, mercy, and grace.  Transform their lives.  May members of John’s family become vocal representatives for Christ in the years to come.  Thank You for his service to America.  May thousands of people be inspired to serve others courageously because of the media attention on John’s career.  Father, I ask that the man or woman of Your choosing will replace John McCain in the Arizona Senate seat. Amen.

Dear Father, Tim Conway, 84, is an American actor and comedian who became famous starring in television shows such as McHale’s Navy and The Carol Burnette Show. He was the voice of Barnacle Boy in SpongeBob SquarePants. He is the father of seven children with his first wife Mary Anne. He has been married to his current wife Charlene since 1984. He is in the news tonight because the family is reporting his dementia has advanced to the point where he can no longer responsive, completely incapable of taking care of himself.  Father, I ask that You will have mercy on Tim even this very day.  May he somehow feel Your comfort and grace.  I don’t know if he knows You or Your Son.  If he does not, give him a few moments of lucidity so that he will be able to turn his life over to You.  I ask that his family members may turn to You in his final days and may they find the answer in You for all of their questions about life.  Turn Tim’s condition into a moment when lives are transformed.  Amen.

Dear Father, four teenagers were killed on Saturday when they were struck by a car while they were pushing a broken-down SUV on an Indiana highway. Nine children, ages 12-16, were being driven to a party by Cara Selby, 37, when her SUV broke down. The teenagers agreed to push the SUV down the road. Elizabeth Watson, 24, was the operator of the second vehicle. Nevaeh Law, Jenna Helton, Brittany Watson, and Martin Martinez were killed. Four other teens were injured.  Father, what a horrific tragedy for Cara and Elizabeth and the families of Nevaeh, Jenna, Brittany, and Martin.  Father, overwhelm each of these individuals with Your amazing grace.  Comfort them. Give them understanding. Work out all the details of the funerals.  Where there is guilt or bitterness, shower them with forgiveness.  Father, heal those who were injured – physically, emotionally, and spiritually. May people look back on this tragedy as a moment when Your love changed a life and inspired others to care for their neighbors. Amen.