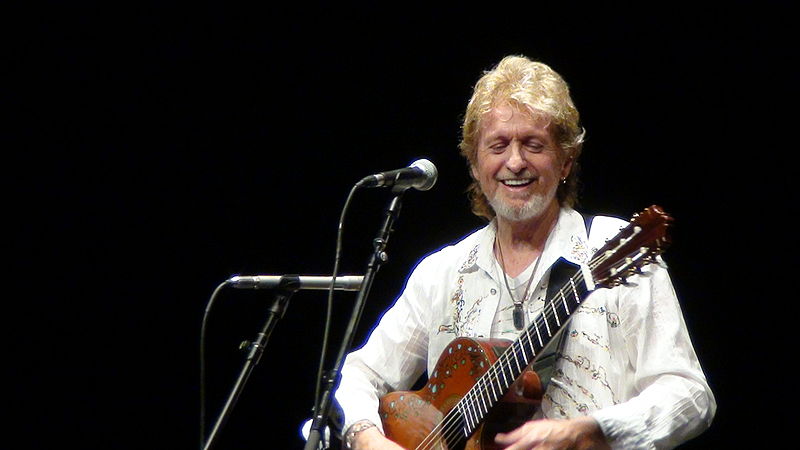 Dear Father, I received word yesterday that a woman named Leah has received a diagnosis for colon cancer. She is the 20-something daughter of a couple I knew in a Pennsylvania church that I formerly attended. Father, I ask for Your grace and mercy on her today. I ask that she will become one of the “survivors”, the men and women who are cured of colon cancer. Father, please give the medical team the expertise and skill to successfully battle this cancer. Do whatever they can’t do on Leah’s behalf. Stop the advancement of the cancer. Eliminate the cancer from her body. Give her the physical and emotional strength during her battle. May her faith strengthen and may her story be inspiring to many about how Your love can walk us through and deliver us from anything. Father, comfort her and all who love her dearly. Fill them with inexplicable peace and joy, knowing You are loving at all times. Amen.

Dear Father, Jon Anderson came to fame with the band “Yes” in the early 1970s. The band, with a lineup in the mid-70s of Anderson, Rick Wakeman, Alan White, Chris Squire, and Steve Howe, was one of the most successful progressive rock bands in history. Their albums The Yes Album, Fragile, Close to the Edge, and Going for the One, to name a few, included tracks that millions of fans know by heart today. Despite Jon’s New Age leanings, Jon’s voice and his music has touched my heart through the decades and I consider myself one of his many fans. He has certainly heard the gospel of Jesus Christ, attending a Methodist school in his youth. His friend, Rick Wakeman, is a man reported to be a believer. Jon has recorded a song with Christian artists 4Him. Jon believes, as I understand it, that there are many paths to heaven but the most beautiful thing is to love ourselves and to love others. While love is at the core of Christian teaching, scripture teaches us that we cannot truly love others until we first love God with all of our heart and soul. Father, I ask for Your mercy and grace upon this man. He longs to not only discover spiritual truth but to live his life in accordance to that truth. I ask that You will reveal Yourself to Him stronger than You ever have before. May Jon have a “Damascus Road” encounter with You and may it change his life. May his heart and mind be transformed, giving to him a deep understanding that Jesus Christ is the focus of all spiritual realities. May he not only know Jesus Christ but also invite Christ into his own heart. I ask that his fans will enjoy at least one song recorded by Jon that expresses his spiritual rebirth and renewal. Meet Jon’s needs today, whatever they may be. May he experience the love of God in his life and may he find himself in a place where he’s eager to thank You for Your goodness to him. Amen.

Dear Father, Tonya Harding, 47, is a retired American figure skater. She grew up in Oregon in, as I understand it, experienced a very dysfunctional family.  She began ice skating lessons at the age of four. She became the first American woman to successfully land a triple axel in competition. She won the Skate America competition twice. She was the 1991 and 1994 US figure skating champion and the 1991 World silver medalist. She skated in two Olympics. However, her world came apart in January 1994 when her ex-husband, Jeff Gillooly, conspired with a friend to physically attack Harding’s rival Nancy Kerrigan prior to the US national championship, the event immediately preceding the 1994 Winter Olympics in Lillehammer, Norway. The attack caused Nancy to miss the national championship and transformed Tonya into a villain in the public’s eye.  However, Kerrigan was able to win a silver medal in the Olympics while Harding, who had won the national championship, came in 8th place. Harding avoided jail term by pleading guilty to conspiracy, accepting her ban from competitive figure skating, committing to community volunteer service, and paying an $100,000 fine. Since the incident, she has appeared in low-budget films and television shows. She has also participated in celebrity boxing. A movie about her life, I, Tonya, was released in September 2017 and received nominations for several Academy Awards. Many people continue to be critical of her.  There are disputing reports as to whether or not she has asked Nancy for forgiveness.  It is clear Tonya wants to put this controversy behind her and build a new life.  She wants to restore her reputation.  Dear Father, I know You love Tonya deeply.  You created her.  You witnessed the difficult times she has experienced.  You also witnessed the times Tonya has made poor judgements, something we are all guilty of.  Father, I ask that You pour Your heart out into her life.  May she find You and may she find true freedom, forgiveness, grace, and mercy at the Cross.  May her heart and soul be transformed.  Give her a testimony of a new life, a redeemed life, that gives hope to many people who live broken and dysfunctional lives.  Meet her needs today – physically, financially, spiritually, and emotionally.  I ask even for a miracle – that Tonya and Nancy may one day embrace and demonstrate that You can repair even the most bitter of relationships.  Amen.

Dear Father, Libby Schaaf is the 52-year-old Democratic mayor of Oakland, CA. The former attorney and member of the Oakland City Council began serving as mayor on January 5, 2015. One of her priorities in office has been improving Oakland-area transportation. She took a controversial stand by instituting a ban on nighttime marches on public roadways without permits. This policy has clashed with the desires of various movements who wanted to march in Oakland. The mother of two, who is also an advocate for volunteering in the city, is in the news today because she has warned Oakland residents of an impending raid by US Immigration and Customs Enforcement (ICE) agents seeking to detain illegal immigrants. Oakland is a “sanctuary city”, a city where employees (including the police) are pledged not to help ICE agents make arrests. Her stance may lead to a conflict with federal officials and her own potential arrest.  Father, I pray today for her spiritual life.  You love her deeply.  You created her.  You long to have a close relationship with her.  I pray that You will orchestrate events in her life that lead her to commit her life to You.  May her heart and soul be transformed.  May she seek You for wisdom and direction and may she be surrounded by godly advisors.  Father, may her passion to protect illegal immigrants grow into a desire to rescue people who are spiritually lost.  Meet whatever physical, spiritual, or emotional needs she has today. Amen.