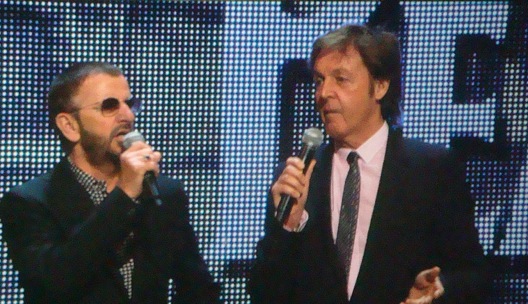 Dear Father, Your Word tells us it is hard for a man or woman of wealth to come to faith in Jesus Christ. It is our human nature to want to be our own gods. We want to rely on our own strength and to decide for ourselves what is right and what is wrong. When an individual enjoys incredible wealth, fame, influence, and pleasure, the temptation to reject You intensifies. They have everything they need. They have the money to buy any solution. They have people lining up to serve them who want to be connected to the famous. There are no restraints to their satisfying any desire. They consume praise from others with every breath they take. Father, few people have ever experienced this more than Paul McCartney and Ringo Starr. They are the two surviving members of the Beatles, the rock quartet that transformed world culture in the 1960s. However, the truth is that Paul and Ringo are not gods. They are human beings. They will die one day like the rest of us. None of the wealth, fame, influence, and pleasure that they had on earth will come with them into the next world. They will appear before You and give an accounting for their lives. Father, they need Christ just as much as the poorest and least known person on the planet. When they are alone in the privacy of their homes, they experience thoughts of their own insufficiencies, fears, and insecurities. They are human. Father, I lift up both Paul McCartney, 75, and Ringo Starr, 77, to you today. I ask You to have mercy on them. Come into their lives. Perform a miracle. Lead them to faith in You. Comfort them in their private anxieties through the peace of God that passes all understanding. Father, I ask that each of these two men will experience the salvation of their souls before they depart this earth. According to reports, Ringo is already expressing an interest in things of God. I pray that You will use those thoughts and complete Your work. May Ringo lead Paul to faith. Father, this is not impossible for You. You can do all things, including breaking through into hearts that are defended by extreme wealth, power, fame, and influence. Amen.

Dear Father, Stephen Hawking is an English scientist, mathematician, physicist, cosmologist, author, and researcher. He is well-regarded in the scientitifc community and he has been the recipient of many awards. He also has amyotrophic lateral sclerosis, otherwise known as “Lou Gehrig’s disease”. In short, the disease causes the loss of voluntary muscle movement. Muscles weaken, shrink, and become stiff. The ability to swallow and breath can be lost. Stephen is now confined to a wheel chair and is able to communicate only through a single cheek muscle attached to a speech-generating device. Stephen is a proponent of the idea that science rules over religion. He has stated that if You created science, You never interfere with science. In other words, You never perform miracles. Stephen has said that there is no heaven or afterife. Oddly, in the television series Curiosity on the Discovery Channel, Hawking said:

“We are each free to believe what we want and it is my view that the simplest explanation is there is no God. No one created the universe and no one directs our fate. This leads me to a profound realization. There is probably no heaven, and no afterlife either. We have this one life to appreciate the grand design of the universe, and for that, I am extremely grateful.”

Father, after he highlights the rebellious intent of mankind, to be free to think and do whatever we want, Stephen denies Your existance while at the same time implying there is a designer who designed the universe. Merriam Webster uses words like “create”, “fashion”, “construct”, “conceive”, “plan”, and “draw” to define the word “design”. All of these words require an intellect that performs these actions. If there is a design, there is a mind that put the design together. Stephen is “extremely grateful” for the work of a God that he says does not exist.

Father, I ask for Your mercy on Stephen Hawking. I can’t imagine suffering through what he must face every minute of every day. He is imprisoned in a body that cannot move. He is 100% dependent on others. There is no relief. On top of it all, he has no hope for a better life. He denies Your existance and, therefore, he rejects the hope, peace, and joy that could help him through each day. Father, rescue this man. Rescue him from the darkness that robs him of hope. May he have a “Damascus Road” encounter with the real living and loving God who created the science he loves so much. Father, I ask that You bring him to faith in You so that he will one day walk, run, and jump in the very place that he says does not exist today. Father, I ask that You do something very compassionate for him today. Amen.

Dear Father, a worker pushed the wrong button and sent out a message to the residents of Hawaii on Saturday – “Ballistic missile threat inbound to Hawaii. Seek immediate shelter. This is not a drill.” With all of the talk in the news of North Korea’s threat to send nuclear missiles to American soil, the population of Hawaii had every reason to believe such an emergency alert was genuine. Apparently, thousands across Hawaii panicked over a period of about 30 minutes before a correction was sent out “No missile threat to Hawaii.” Father, I am thankful that this was not a true nuclear weapon threat. You have been faithful to protect populations around the globe since September 1945. I ask that You continue to do so. I am confident it is You alone we can thank that no other cities have not been destroyed since the bombings of Hiroshima and Nagasaki. Father, many people in Hawaii were forced to consider their mortality and their impending demise on Saturday. I ask that You will use that experience to bring many of those people to faith in You. May that moment of fear lead many onto a track of spiritual deliverance. I also ask Your grace and mercy on the worker who mistakenly pushed that button. Father, bless that person today. Meet their needs. Draw them into a close personal relationship with You. Give them freedom from guilt or embarrassment. I ask that this person will become an ambassador for Christ in the years to come. Amen.

Dear Father, I understand that a mezzanine floor overlooking the main lobby of the Indonesian Stock Exchange building in Jakarta, Indonesia collapesed today. Many people were injured when they were crushed by slabs of concrete and other debris. As of this hour, no deaths have been reported. Father, I ask for Your mercy and grace on each of the victims. Help them to heal physically and emotionally from the experience. I pray that this incident will lead the victims to evaluate their lives and to cry out to You for spiritual freedom and deliverance. Amen