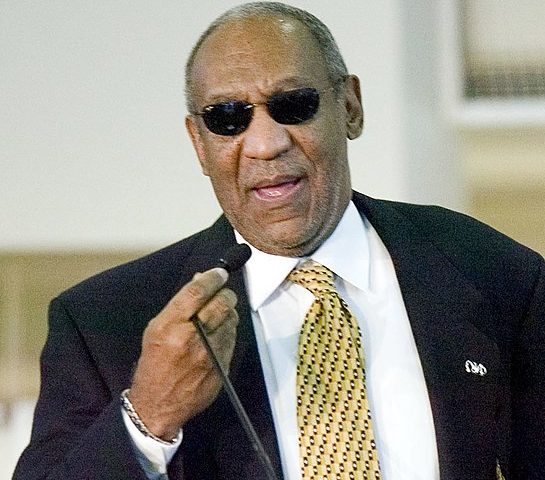 Dear Father, Bill Cosby is a author, comedian, musician, and actor. He became famous during the 1960s with his stand up comedy routines and his starring role on the television show I Spy. I grew up watching his Saturday morning animated series Fat Albert and the Cosby Kids. He continued to star in various films in the 1980s while he earned a master’s degree and a doctorate from the University of Massachusetts. From 1984 to 1992, he starred as Dr. Cliff Huxtable, a successful OB/GYN, in the NBC television show The Cosby Show which was ranked as the #1 show in America for five years. Throughout his career, Bill Cosby crafted his image as that of a man of good character and a good father figure for America’s African American community. However, approximately 60 women have gone public, accusing Cosby of sexual assault in incidents that date back to the 1960s. The women’s stories are consistent – the woman is eager to meet the well-known and well-respected celebrity; he befriends them and offers his assistance in the advancement of their careers; he orchestrates a meeting where they are alone; he offers them a drug for relief of a headache or anxiety that knocks them out; he takes advantage of them sexually; they awake to discover they not only have been sexually violated but Cosby is now indifferent to their plight; they are silenced by the fear of going public against a beloved American celebrity or by hush money they receive. The statute of limitations has expired on most of these alleged crimes. However, the case of Andrea Constand was still prosecutable. Cosby settled a civil lawsuit filed against him by Andrea for a total of $ 3.38 million in 2006. Andrea agreed to keep her allegations private. However, after another comedian’s discussion of the allegations against Cosby went viral on the Internet in October 2014, resulting in many more women coming forward, Constand decided to pursue a criminal charge against Cosby. The #MeToo discussion in our culture, where many women are coming forward to share their stories of sexual abuse, certainly encouraged Constand and the dozens of women who support her efforts. Because of the charges against Cosby, many organizations and institutions revoked awards they had given Cosby and disassociated from him. The first trial ended in June 2017 in a mistrial. However, the second trial resulted in Cosby being found guilty on three counts of aggravated indecent assault and he is awaiting sentencing. His sentence is expected to be anywhere from 10 to 30 years in prison. Cosby, who is 80 years old, is likely to pass away while incarcerated. Father, now that justice has been served, I pray for emotional healing for each of the women who came forward to share their story of their encounter with Cosby. I ask that many of them will find true and lasting peace in a personal relationship with You. When they do, fully remove their emotional scars. I pray that there will be women of God who emerge from the list of victims of Bill Cosby. I also pray for Bill. Father, while I do not approve of his behavior at all, there is a reason for it. Did something happen to him in his childhood? Was his abusive behavior the result of trauma he experienced in his youth? Father, I ask that You will have compassion and mercy on him. Heal what is broken in his heart. Heal the scar that he has. Lead him into a personal relationship with You even while he is incarcerated. May he experience forgiveness for his sins and his rebellious heart, something we all need to experience. May his final days be days of contentment knowing his relationship with You has been restored and his eternal future is bright. I also ask that there will be godly men who rise up in our culture and become authentic examples of good character and good fatherhood. May their images never be tarnished by scandal. Amen.

Dear Father, Michelle Wolf is a Pennsylvania-born comedian. After graduating from the College of William and Mary in 2007 and working in the banking industry for four years, Michelle launched her career as a comedian. She appeared on late-night television and joined the staff of Late Night with Seth Meyers. Her fame increased through her work with Comedy Central, a web series on YouTube, The Daily Show with Trevor Noah, her work at the Comedy Celler in New York, and appearances on HBO. In addition, she has appeared many times on British television. She is in the news days because of the content of her comedy routine while she was hosting the April 28, 2018 White House Correspondents’ Association Dinner. Many believed her jokes about individuals in the Trump Administration were too mean-spirited and hurtful, causing a backlash against Wolf even by traditionally liberal media outlets. Wolf has brushed aside the criticism, apparently not believing she needs to apologize for her personal attacks. Father, You created Michelle Wolf. You created her to have a personal relationship with her. You desire to walk with her through life and to bless her as she surrenders her life to You. I ask that You will be gracious and kind and bring about her spiritual transformation. May she encounter Your deep love for her in such a way that she begins to display a godly character that is loving and encouraging of others. Meet her needs today and give her plenty of reasons to thank You. Amen.

Dear Father, a few months ago Kim Jong Un, the North Korean leader, was threatening a nuclear showdown against South Korea and the United States. President Trump of the United States responded in kind, threatening Kim Jong Un with devastation should the dictator attempt an attack. Many political pundits were appalled at Trump’s aggressive stand, citing that previous presidential administrations had never taken such a hard line against North Korea. However, Kim Jong Un has now reversed his provocation and is making peace overtures. His athletes played hockey with athletes from South Korea at the recent Winter Olympics. He is scheduled to hold a summit with President Trump. He is in the news today because he recently held peace talks with South Korean President Moon Jae-in. Both countries will remove propaganda loudspeakers along the border. The two Korea’s are also synchronizing their clocks so both Korea’s have the same time. Kim Jong Un has also stated that they will dismantle their nuclear test site and that experts and journalists from the United States and South Korea will be invited to observe. The North Korean dictator has also suggested he will have an historic meeting with Japan’s Prime Minister, Shinzo Abe. It is unknown whether Kim Jong-Un’s peace initiatives are sincere, given the country destroyed nuclear testing facilities in the past while they were secretly building new ones. His country has been devastated by economic sanctions he certainly wants to end. North Korea is also essentially a third world country in need of infrastructure improvements. Regardless, there are no precedents to the sudden warming of relations between North and South Korea dating all the way back to the Korean War. Father, I ask that these peace talks are authentic and genuine. I ask that You are moving in this situation, working to free the people of North Korea from decades of tyranny and poverty. I ask that You are liberating Your church in North Korea, a church that has suffered intense persecution. Father, be kind and gracious to the innocent people of North Korea who have been imprisoned by the megalomania of the Kim family. Keep warming Kim Jong-un’s heart and may he truly free his people to enjoy economic prosperity and civil liberties including the freedom to worship the God of their choosing. Amen.