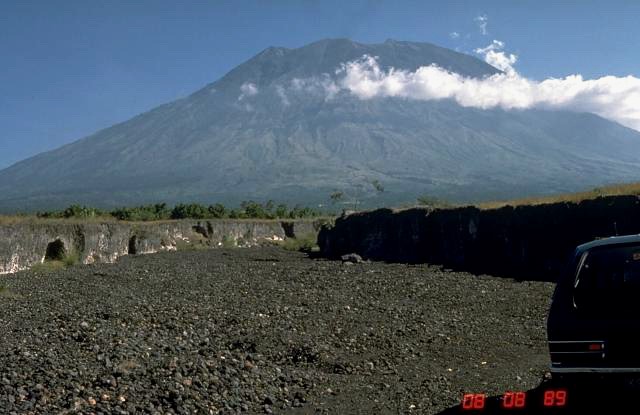 Dear Father, Mount Agung in Karangasem, Indonesia appears to be on the verge of erupting. There has been an increase in seismic activity in the volcano since September, though the activity decreased temporarily in late October. There is fear the volcano will explode as it did in 1963, an event which killed an estimated 2,000 people. There is a Hindu temple on the slopes of the mountain called Pura Besakih. The lava stopped yards from this temple in the 1963 eruption, a fact that led many Indonesians to conclude the gods had protected the temple. Father, I ask first that You protect human life in the event of an explosion. I pray that the lives that are rescued from an eruption will have a personal encounter with You, their loving, compassionate, gracious, and merciful Creator. May these individuals place their faith in You, the true living God. Second, I pray that the threat of eruption will spark many individuals to cry out to You for rescue not only from the volcano but also rescue from the burdens they carry in their lives. Father, be victorious today over all idols, idols in Bali, in every country, and in every heart including mine. Amen.

Dear Father, it has been announced that Prince Harry will marry Meghan Markle in 2018. Harry, 33, is fourth in line to the British throne. Meghan is a Hollywood actress who has appeared in a variety of television shows. Her first marriage ended in 2014. She is reported to be active in World Vision and an advocate for gender equality and victims of modern-day slavery. Father, the two will be a part of the royal family but they are also human beings. They have limitations. They have insecurities. They have weaknesses. Their marriage will require deep love and faithful devotion for it to work, just like any other marriage. Father, they need You to be at the center of their marriage. Father, give both of them a longing for a relationship with You. May both of them look to You for guidance, direction, provision, and protection. I ask that this marriage will not end in divorce. I ask that there will be no scandal in the tabloids. I ask that the people of Great Britain, and the world, will see before them an example of what a healthy marriage looks like. Father, it must be difficult to walk with You when an individual has such enormous political, economic, and cultural power. Father, make this couple an example that even those who have it all can still place their trust in You for their lives. Amen.

Dear Father, I ask for You to be compassionate and merciful to the congregation of Grace Lutheran Church of Chester, VA. Their youth pastor, Christopher Gattis, 58, is alleged to have killed his wife, his step-daughter, and his step-daughter’s boyfriend on Thanksgiving evening. Father, I ask for your compassion to be abundant today on the families and friends of the victims. Comfort them in their grief. Give to them what they need. Lead each of them into a closer relationship with You through this. Father, I pray that your grace will be generous on the congregation of the church. The church leadership, the members, and the attendees must certainly feel shock and dismay. A trusted leader of the children has been charged with the murder of three people. Father, this horror has shook the very foundation of this church. However, that doesn’t mean the church must collapse. Father, the church can become stronger through this nightmare. Shared grief can unite the church. Each individual may feel a renewed calling to embrace Your commands to love You and love others. Interaction with the local community as a result of this crime is an opportunity for the sharing of faith and the touching of lives. Father, turn this whole horror into something beautiful. Show the amazing strength and resilience of the faith of this congregation by how they respond to this event. As for Mr. Gattis, Father, may remorse lead to confession and a rededication of his life to Christ. If he is guilty of the crime, may justice be served to him. However, may his time behind bars be one that transforms him into an incredible man of God. Amen.