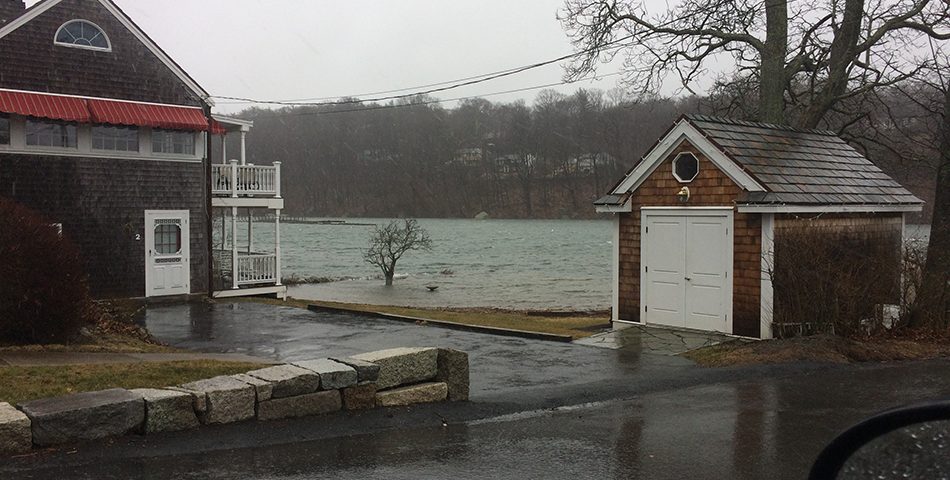 Dear Father, the winds are still blowing strong outside here on Cape Ann, Massachusetts. The house was pounded yesterday from a northeaster that had exploded in the Atlantic Ocean nearby. The sea flooded into our village, filling a few backyards and crossing one road. A neighbor called me from out-of-state and asked me to check on her house across the cove. I had to sadly report the floodwaters had filled her basement. Seven people have been killed by Winter Storm Riley’s strong winds and storm surge at high tide. 2.1 million homes and businesses from North Carolina to Maine lost power. Thousands of home owners are dealing with serious damage to their property. Father, this storm is a reminder of how much we, the human race, need You in our lives. We are helpless when powerful storms come into our lives. All we can do is to attempt to survive and to care for victims. We can’t redirect the storm or to scale down its intensity. When the floodwaters invade our backyards in route to our homes, all we can do is to pray for rescue and deliverance. Father, You are God and we are not. We need You. I ask that many of the victims of this storm will take a few moments to ponder spiritual realities. May many of those who clean up their homes and businesses look also into the mirror to clean up their lives. Father, use the storm to bring about spiritual transformation. I pray for those who lost loved ones. Meet their every need. Comfort them. Give them peace. Walk with them through their grief. Help them to heal. Give them testimonies of Your incredible compassion that will inspire many. I also pray that You will be generous to those who lost property, especially those who love You. Help them to recover financially from this disaster. Amen.

Dear Father, Kevin Kühnert, 28, runs the youth wing of Germany’s center-left Social Democratic Party (SDP). He is considered a rising star in German politics. He has made the rounds of campaign stops and television shows in his bid to rid Germany of Angela Merkel, the Chancellor of Germany and a member of the center-right Christian Democratic Union party. Angela Merkel is in power because of a coalition her party has made with the SDP. This has led to the growth of the far-right Alternative for Germany party. Mr. Kühnert seeks to break that coalition and to move the SDP farther to the left, championing worker’s rights, welfare, globalism, and an open society. Kühnert believes an SDF party that gets back to its roots will defeat Merkel and restore long-term stability to Germany. Father, You have created Mr. Kühnert, a man who professes to be gay. You gave him the skill and the charisma that he is now using to inspire political change in Germany. I ask that You will lead him to You. May he turn is life over to You. May he experience the full joys of walking with his God. Give him wisdom and may he love Your Word and enjoy coming to You in prayer. Guide his steps and lead him to the position of leadership where he can best promote justice, mercy, and compassion for the needy in Germany. Use Kühnert to directly or indirectly strengthen the church in Germany. Amen.

Dear Father, RuPaul was born in Southern California, the only son with three sisters. It is reported that is family was poor. I suspect that his childhood homelife was dysfunctional as he has been quoted as saying he seeks “validation from my father.” RuPaul decided at an early age that his purpose in life was to question gender norms and stereotypes. I surmise that he believed the struggles in his family were associated with his father expecting him to conform to rigid ideals of masculinity. In RuPaul’s worldview, a man can explore femininity without having to change his gender. RuPaul’s beliefs led him into the world of drag queens, where men perform as exaggerated, theatrical, and humorous caricatures of femininity, not intended at all to simulate normal womanhood. RuPaul’s Drag Race television show is a combined reality and talent show that has exploded in popularity in mainstream America. In fact, Democratic Minority Leader Nancy Pelosi is scheduled to be a judge on the show this season. It is reported that the “girls” compete on stage but support one another off-stage. RuPaul has been quoted as saying that the success of show is the theme that we can “do whatever we want.” Father, that is the theme of the rebellion of the human race. From Adam to this very day, we long to do “whatever we want”. We want to do what we want, when we want, how we want, and where we want. We don’t want to be accountable to You. We don’t want to live for Your honor or glory. We want to live for ourselves. RuPaul is celebrating this rebellion. Father, I know You love RuPaul and his husband George. I know You would love for them to turn their hearts to You. I know You would love to transform their lives so that they can experience the full peace and joy of walking with God. Father, I ask that You do that for them. May RuPaul and George have an encounter with You at some point in their lives that leads them into personal relationships with You. When that occurs, You will change their values and priorities as You see fit. Help RuPaul to heal from any scars from childhood. In the meantime, I ask that You meet both of their needs. Give them many reasons to thank You for Your grace and may they clearly understand that. Father, I ask that vulnerable men and women who are seeking You will not be deceived or entertained by programming that celebrates rebellion from God. I also pray that You will walk into the “girls” dressing rooms, choose men, and lead them out and into a place where they embrace Christ-like masculinity. Amen.

Dear Father, it was reported in the news yesterday that James Eric Davis Jr. fatally shot his parents, James Davis Sr. and Diva Davis, at Central Michigan University. Apparently James Sr. was a Bellwood Illinois police officer. Family and friends describe the family as loving and close. There is reason to believe the parents were in Michigan, perhaps on an intervention, to help their son who had spent a night in the hospital related to drugs. Father, I ask for Your mercy and grace to pour into the lives of those who grieve the loss of this couple and the arrest of this youth. Comfort them. Provide for them. Help them with the details. Walk with them through the grief. Give those who mourn today healing. I also ask that You work in James Jr.’s heart. Intervene. May he have an encounter with You that leads him to surrender his life to You. May he come to faith in prison and may his heart be transformed. I ask that people in prison ministry will effectively model the love of Christ to him and his life will be changed. Give James Jr. a testimony that inspires many. Amen.

Dear Father, a community outreach pastor at Antioch Community Church in Waco, Texas has been arrested on a prostitution charges. Apparently Edward Ignacio Espinosa has been paying for sex at two massage parlors where the Asian staff are forced into prostitution by human traffickers. The leadership of Antioch Community Church has made a commitment to minister to women caught up in human trafficking. It is likely that Mr. Espinosa was introduced to this behavior through his contacts associated with the ministry. Father, the report states that the leaders of Antioch Community Church are heartbroken and they make clear Mr. Espinosa’s actions do not in the slightest represent the morals and values of the church. Mr. Espinosa, who was released on bail for $ 1,000, has been dismissed from his position at the church. Father, I ask that You have victory in this tragedy. Transform Mr. Espinosa’s heart and mind. Restore his desire to love You with all of his heart, soul, and mind. Lead him to surrender his life to you. Lead him to confession, repentance, and renewal. May his story become an inspiring story in the 2020s of Your forgiveness and grace. I pray for the church whose reputation has been tarnished by this. Father, do a miracle in this church and bless their ministries. May many lives be transformed for good because of how they handle this situation. I also pray for the women in the massage parlors. Father, free them. Restore to them dignity and respect. Make them women after Your own heart whose lives are testimonies of the amazing power of God to change anyone. Amen.

Dear Father, we have another story of children who have been rescued from a horrific home situation. Three children, aged 11, 13, and 14, were living in a plywood box in Joshua Tree, CA with no sanitation, food, or running water. Their yard was strewn with trash and human feces. The parents, Daniel Panico, 73, and Mona Kirk, 51, have been charged with three counts of felony child abuse. Father, I ask that You pour Your love into the lives of these three children. Heal them both emotionally and physically. Give them spiritual rebirth through Jesus Christ. Give them the education and training they need to thrive as adults. I ask that Your church will minister to these kids and the love of God that they exhibit will erase the impact of all of the psychological damage these kids have experienced. As for the parents, lead them into a relationship with You. Give them the help they need. The story suggests that the only reasons this has happened was because the parents had extreme poverty. Father, don’t let Your church miss out on opportunities to minister to the poor. Children are being lost to traumatic experiences. Amen.