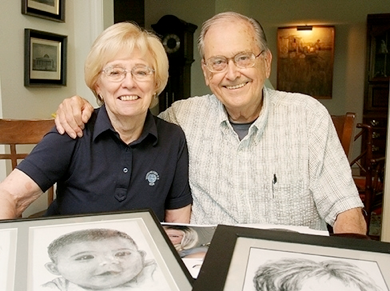 Dear Father, former President George Herbert Walker Bush passed away on Friday, November 30, 2018, at the age of 94. Few have served our nation in as many different ways as did the 41st President. Not only did he hold the nation’s highest political office from 1989 through 1992, he was also President Reagan’s Vice President for eight years. He was a U.S. Representative, an Ambassador to the United Nations, Chairman of the Republican National Committee, an envoy to China, and the Director of the Central Intelligence Agency. He served as a director on the Council on Foreign Relations, chairman of the executive committee of First International Bank, and a professor at Rice University. Perhaps his greatest achievement was a 73 year marriage to his late wife Barbara. He was the father of both President George W. Bush and Florida Governor Jeb Bush as well as four other children. Our nation will mourn his passing as we do with every President who passes away. his body will lie in state in the U.S. Capitol. There will be a memorial service at the National Cathedral. His body will be flown to Texas where services will continue until he is laid to rest at his presidential library. Father, there can be no question that You called him to serve as the leader of our nation. Your Word tells us that every leader leads their countries because You are sovereign over the nations. President Bush was equipped for the unique calling You had given him. His work had as much to do with his impact upon individual lives, including his staff, as it did on domestic and foreign affairs. Thank You for his service to our nation. I thank You for the example of marital devotion and faithfulness in a culture where divorce is rampant. I ask that our nation will heal in some fashion as we gather around his casket. We are all citizens, despite our bitter political differences. I ask Your blessings on the Bush family as they mourn their father, grandfather, and great-grandfather. Surround this family with Your love, compassion, kindness, and grace. May there be a spiritual revival among the Bush’s that can directly be attributed to the passing of this extraordinary patriarch. Amen

Dear Father, as the world mourns the loss of President Bush, my relatives mourn the loss of “Uncle Dick”, Richard Grubb of Rhode Island. I thank You that my wife and I had the opportunity to meet with him in person in late 2016 and to speak with him on the phone earlier this year. This man was truly extraordinary. He was wounded in action in World War II. He drove an army vehicle in General Patton’s funeral. He had a successful career as a corporate sales executive. He was an accomplished musician and artist. However, what is my greatest blessing is having witnessed his spiritual renewal in his later years. He experienced his own season of adversity and he grew in faith because of it.  Uncle Dick loved You deeply and his witness touched my heart. I was amazed by his wisdom and blessed that he shared his testimony on Gramazin. Father, thank You that I was privileged to be his nephew. I ask that You pour out blessings to Aunt Miriam, his wife of over 60 years. I also ask Your blessings on his four children, his grandchildren, and his great grandchildren. Comfort them. Provide for their every need. May Uncle Dick’s testimony touch the lives this week of not only his family but also his many friends in the community. Amen.

Dear Father, Kareem Hunt, playing for the Kansas City Chiefs, was arguably the best running back in the NFL in 2017. Playing in his second year, he is fourth in the league in rushing in 2018. A rewarding and honored career seemed a certainty for this 23 year old man. However, a video surfaced this week proving that Kareem was physically abusive to a woman at a Cleveland hotel in February. He had denied the accusations to team and league officials prior to the release of the video. The Chiefs and the league reacted swiftly to the evidence of both his abusiveness and dishonesty. Kareem was released from the team and banned from the NFL until he is exonerated. Father, this is a dangerous moment for this young man. The certainty of incredible fame and fortune has evaporated overnight. His world has been devastated. This is the kind of moment when many might life-changing foolish things because of their inability to cope with such a change in their life. I ask that You protect Kareem from both himself and from those who would take advantage of his vulnerability. Dram him close to You. Use this crisis in his life to lead him into a personal relationship with You. May this season be the beginning of an amazing testimony of Your love, mercy, and grace. May Kareem end up becoming a man who leads many others into a relationship with You. Amen.

Dear Father, Jerry Nadler is the Democratic U.S. Representative from New York’s 8th District. His district covers much of Manhatten, from Central Park down to the New York Stock Exchange and the Statue of Liberty. He will take over the leadership of the very powerful House Judiciary Committee in January when the Democrats regain control of the House. He has vowed to use his power to investigate President Donald Trump, especially with respect to the Democratic charge that Trump allowed Russia to influence the 2016 Presidential election. Michael Cohen, Trump’s former private attorney, has admitted that Presidential-candidate Trump’s business team was talking to the Russians about building an office tower in Russia as recently as June 2016. Cohen had previously either denied such negotiations or said they had ended before Trump’s run for office. This admission of deception may lead to jail time for Cohen who is on record lying to Congress. The admission is also considered by Nadler to be evidence that Russia was having influence on Donald Trump during the 2016 campaign. However, others say there is no crime here. Trump was an international businessman and real estate executive simply doing his job while he ran for office. His defenders ask why a man or woman needs to close down their business while they are running for an office few expect them to win. Certainly, what a politician does in business after an election is a different story. However, people are not accusing Trump of arranging Russian business deals after his November 2016 election victory. The investigation is about his actions during the campaign. Regardless of the right and wrong of this issue, I am going to take advantage of the opportunity of Jerry Nadler being in the news to bring him before You. Father, I know You love him. You created Him to have fellowship with You. You long to walk with him through life each and every day. You are eager to bless him abundantly when he surrenders his life to You. Father, bring about his spiritual transformation. Lead him into faith in Your Son. Give him godly wisdom and understanding that he can’t keep to himself. May the wisdom that comes out of his mouth as a result of what You’ve done in his heart startle Washington D.C. May we hear in the 20’s an amazing testimony from Jerry Nadler about his new life walking with You. Amen.

Dear Father, France is in crisis. President Emmanuel Macron is considering imposing a state of emergency in response to protests by over 70,000 French citizens. The citizens are protesting the high cost of living and a tax increase to fund Macron’s climate change programs have become violent in Paris. Homes have been damaged, cars have been torched, shop windows have been shattered, and stores have been looted. The 182-year-old Arc de Triomphe was vandalized. Hundreds of people have been arrested. Despite the protests and calls for the Parliament to be dissolved and new elections to be held, 40-year-old President Macron remains committed to his fight against global climate change. Surveys suggest that the majority of the French population sympathize with the protestors, thought there is evidence that the more violent protestors are anarchists taking advantage of the crisis. This is considered the most serious domestic crisis in France in 50 years. Father, I ask that You bring peace to France. Give power to the voices of those who are calling for peace and patience. Bring leaders together for dialog and negotiation. I ask that You will work out a solution that satisfies both sides in this dispute. Father, use Your creativity to turn this political crisis into the advancement of Your church in France. May the church be empowered in some manner because of the unrest in the country. Please protect innocent lives who are accidentally caught up in the mayhem. Amen.