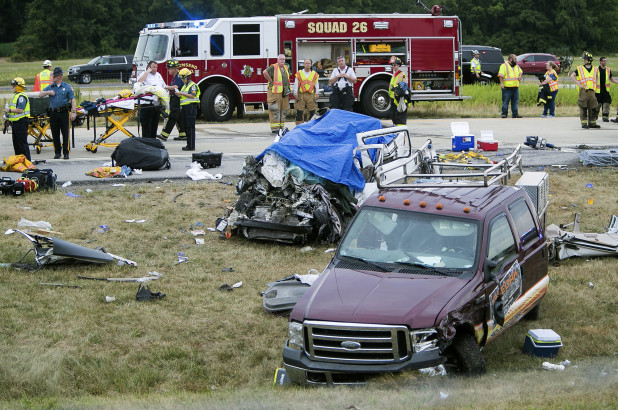 Dear Father, on Friday afternoon the Trinidad family of Teaneck, NJ were returning home on northbound Rt. 1 in Delaware from a July 4th vacation in Ocean City, MD. A southbound truck owned by Aledak Metalworks of East New Market, MD crossed the median and struck one car before having a catastrophic collision with the Trinidad family’s minivan. Audie Trinidad, 61, the father, and his four daughters, Nikki, 20, Danna 17, and 13-year-old twins Allison and Melissa, were killed. The only survivor of the accident was the wife of the driver, and the mother of the four daughters, Mary Rose, 53. She sustained serious but not life threatening injuries. The two occupants of the truck and the single occupant of the first car were released from the hospital after receiving treatment. Father, the suffering is great for Mary Rose and the relatives. It is incomprehensible. To lose one loved one is unthinkable. To lose five at once leaves us speechless. To attend the funeral of your four daughters and your husband all at once. What words can be said to comfort Mary Rose? What can one say to a wife and mother of four who has suddenly become a single woman without children? Father, I know You know how to comfort her. Pour out Your compassion, mercy, kindness, generosity, and grace into her life. Attend to her every tear. Answer her questions. Make her paths straight and obstacle free. Surround her with the love of Your people. Help her to adjust to her new life. Father, at the right time, bring her a new family. Give her many reasons to be thankful for all the ways You show love to her in this horrific season of life. May she inspire many with her testimony years from now. I ask the same for all those in the family who also grieve this day. Amen.

Dear Father, the government of Haiti announced on Friday a sharp increase in gasoline prices. The Haitian people responded to the news with violent protests in Port-au-Prince and Cap-Haitien that have led to the death of three people. Three missions teams from the United States are trapped in the country. There is a group from Woodland Community Church in Bradenton, FL, another from Glad Church in Mount Juliet, TN, and a third from Faith Community Church in Trussville, AL. All three of the groups are said to be secure in safe locations far from the protests. Father, I ask that You prevent any more loss of life in these protests. I also ask that You will make this unexpected extra time in the country most effective for the advancement of Your church. Touch lives during this overtime through the ministry of these three churches. Keep these ministry teams safe, draw them even closer to You, and bring them back to their home churches without injury. Amen.

Dear Father, the Palestinian Authority has been recently promoting on official television and radio a song that celebrates pregnant mothers preparing the children in their womb to become martys for Palestine. Inmans have been preaching that every Muslim fetus belongs to jihad.  Father, You have not conceived children in women’s wombs so that they can one day kill others through a suicidal bombing.  You have conceived them so that they can delight in who You are and that You can delight in a personal relationship with them.  You have conceived them so that they can do good works in Your name.  Father, I ask You to claim for Yourself each one of these children who have been targeted for a violent death.  Take their lives in a different direction, making each of them agents of Your love in the Middle East.  May they introduce dozens, if not hundreds, of families to the love of Jesus Christ. Amen.

Dear Father, the Republicans hold a slim majority over the Democrats in the United States Senate, 51 to 47. The two independent senators, Angus King and Bernie Sanders, caucus with the Democrats making the true majority a mere 51 to 49. If the Democrats can gain two seats in the upcoming mid-term elections, they will take over the United States Senate. However, three Democratic senators represent states that voted heavily for President Trump in 2016. Those senators are Heidi Heitkamp of North Dakota, Joe Donnelly of Indiana, and Joe Manchin III of West Virginia. Their three votes on President Trump’s upcoming pick for the U.S. Supreme Court are critical to the direction of our nation. If these three senators vote in support of Trump’s pick, as they did backing Justice Neil Gorsuch, they are likely to secure their re-election this fall. However, their votes would guarantee an additional conservative on the Supreme Court, a vote that would impact U.S. politics for a generation. Such a vote could demoralize progressive Democrats who lose hope for their agenda once the court has gone decidedly conservative. Their vote could lead to fewer Democrats coming to the polls in November and additional gains by Republicans. On the other hand, if they reject Trump’s pick for the Supreme Court, they may receive the backlash of Trump supporters in their state and lose their elections in November. This would strengthen the Republican majority in the Senate, perhaps undoing any gains the Democrats might make winning senatorial elections against Republican incumbents. In other words, these Democrats appear to be in a no-win situation. Father, I ask for You to give wisdom and understanding to Heidi Heitkamp, Joe Donnelly, and Joe Manchin III with respect to their vote for Trump’s nomination for the U.S. Supreme Court.  Lead them to cast their vote in accordance with Your will, for the outcome You want.  May their vote advance Your church throughout our nation.  If they vote in accordance to Your will, bless them and protect them from consequences caused by embittered people.  More importantly, lead each of them into a rewarding personal relationship with You.  Strengthen their faith.  Transform their hearts and minds.  Give them a spirit that longs to seek Your counsel and to do Your will – for themselves, for their constituents, and for the nation.  Meet their every need and may they know it is You who has been so generous to them.  Amen.