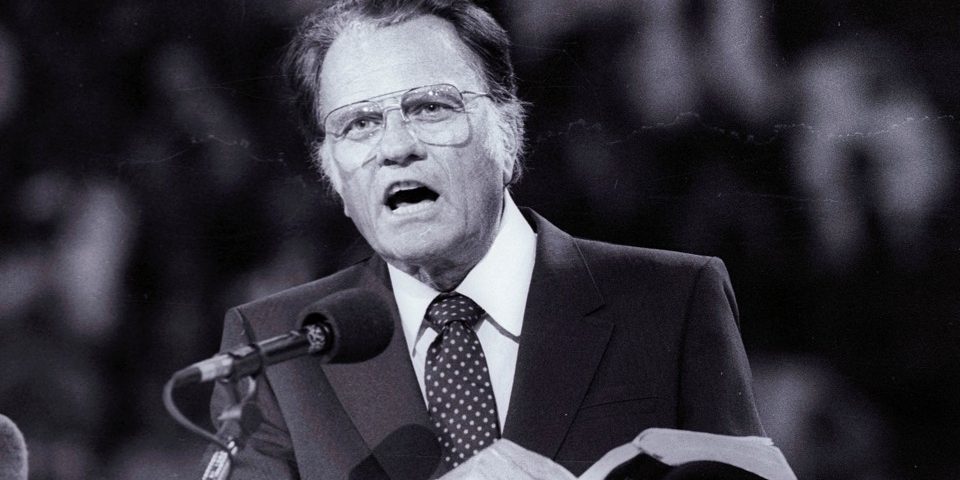 Dear Father, You called Billy Graham home yesterday. His long journey of preaching, teaching, mentoring, discipling, and loving millions of people around the globe has ended. He was no doubt greeted with joy in heaven yesterday and is now experiencing his reward in full. However, those of us in Your family who remain on earth feel a sense of loss today. His shoes will never be filled and there will never be another like him again. You used him to lead millions of people to place their faith in Jesus Christ. It has been reported that his preaching has been heard by over 2 billion people, taking into account radio and television re-broadcasts of his sermons. He was a personal friend and counselor to world leaders. His ministries of compassion refreshed and gave hope to millions of people in crisis. There may never be another Christian like him who will be as widely admired and respected for decades by the secular world as Billy was.

Billy was led to Christ at the age of 16 in 1934 by traveling evangelist Mordecai Ham. He would attend Bob Jones College, the Florida Bible Institute, and Wheaton College, where he met his future wife Ruth. He briefly pastored a church before joining Youth for Christ, focused on a mission to lead WWII servicemen to Christ. He became president of a group of Christian schools in Minnesota. His career as an evangelist was launched when a group in Los Angeles, holding a tent revival, invited Billy Graham to preach. Billy’s preaching was so well received that the revival lasted five additional weeks. William Randolph Hearst was so impressed that he urged newspapers across the country to cover Billy Graham.

Billy’s message of spiritual deliverance and hope resonated with Americans who were in fear of communism and the cold war with the Soviet Union. Billy’s reluctance to take sides in denominational and political debates, his determination to love all people, and the confidence and authority of his message of faith in Jesus Christ made him likeable, approachable, and trusted. Influential people around the globe desired to call him a friend. His paths were made straight and doors were opened wide. His crusades around the world from the 1960s through the 1990s led to the conversions of millions of people. The crusades united diverse churches within cities. The crusades were re-broadcast on radio and television. His popularity enabled his ministry to publish influential books, magazines, records, tapes, and films. His son, Franklin, now leads Samaritan’s Purse, an international relief organization, a reflection of Billy’s heart for the needy. Despite all of this fame and influence, those who knew him personally share that he was a humble, gentle, and kind man. His closest friends and family were blessed by his goodness and authentic Christian walk.

Father, I join the millions who are praying for Billy’s family today. Comfort them as they grieve. Meet their every need. However, I doubt there’s much grieving today at his home. It is a celebration of an amazing life. It is relief that a 99 year old man, struggling with various diseases, has now been released from his suffering. It is the understanding that Billy is now re-connected with his late wife Ruth. It is the knowledge that Billy is having a face-to-face conversation with Jesus Christ, the savior who Billy honored and glorified throughout his entire career.

As wonderful as Billy’s life and ministry was, it is a sober thought to realize that the rebellious heart of mankind has grown colder to the love of God and the message of Christ. It is very clearly a darker world that Billy departs than the world he was born into. Violence. Hatred. Bitterness. Dysfunction. Civil unrest. Self-centeredness. Immaturity. Emotional instability. Drug and alcohol addiction. Domestic and child abuse. What was good is now bad and what was bad is now good. The celebration of indecency and rudeness. The celebration of corruption and decadence.

This is not an indicator that Billy’s ministry failed to change the world. It’s an indicator that people love rebellion from You so much that they will reject to their dying breath the witness of an amazing man of God. If Jesus Christ Himself walked the streets of Boston, New York, Los Angeles, or Seattle in 2018, He would be crucified in social media and mocked in the media. It’s not a surprise that many godless people, such as Laura Duca, are celebrating Billy Graham’s death today. He was the personification of evil for all who believe the highest moral virtue is to let people be whoever they want to be, say whatever they want to say, and do whatever they want to do. Preaching that we will be accountable to God for our lives is not the message self-absorbed people want to hear and they are now relieved Billy is gone.

Father, you are the God of the impossible. Yes, I believe there can still be a revival in this land. However, we need more than one superhero Christian. We need heroic men and women in every church in America who commit their lives to do everything possible to share the love of God with their neighbors. Father, revive Your church!  Revive my heart today.