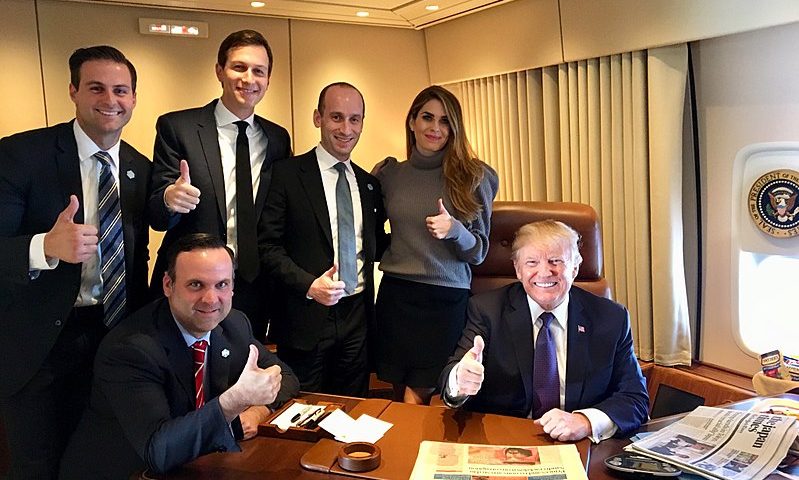 Dear Father, this week Donald Trump announced that Brad Parscale, 42, will head Trump’s 2020 re-election campaign. Trump is confident of his re-election. The economy is doing well. ISIS appears to be under control. He has made progress on the majority of his agenda. Trump has survived calls for investigations against him and threats of impeachment. He has survived attacks upon his character and attempts to break apart his family. These things give him confidence to move forward planning for his re-election campaign. During Trump’s 2016 campaign, he prioritized digital media, including websites. Mr. Parscale, who built a successful web design firm with a partner from a $ 500 investment, was given the responsibility to build Trump’s online presence. His efforts were so successful that Trump expanded Parscale’s influence into media advertising. Now, he has been appointed the head of Trump’s 2020 re-election team. Father, I ask that You work in Brad Parscale’s heart and mind. Lead him into a personal relationship with You. Give him a desire to honor and serve You. Give him wisdom and understanding. I ask that his influence on the Trump 2020 re-election will be one that benefits the ability of the church to change lives by their witness and compassion. Meet whatever needs Brad has in his life today. Surround him with godly counsel and lead him to prayer and to Your Word. Amen.

Dear Father, Hope Hicks, 29, has resigned from her job as the White House communications director. She resigned the day after she appeared before the House of Representatives Intelligence Committee, answering questions about Russian meddling in the 2016 U.S. presidential election. She was asked specifically about Trump’s alleged request of Russia for information about Hillary Clinton in July 2016. She is the fourth person to hold the communications director job in the Trump Administration who has left the office. Hope made the news a few weeks ago when her boyfriend at the time, Rob Porter, another Trump aid, was defending charges of domestic abuse by his former wives. Hope was hired into the job because of her previous work with Trump’s daughter Ivanka. The official line, acknowledged by Hope herself, is that she asked to leave the White House to pursue other career opportunities. Father, You created Hope. You desire to have a personal relationship with her. You desire her to walk with You through her life. Father, lead her into a close relationship with You. Strengthen her faith. May she turn her life over to You and may she be blessed for it. Lead her into a career that leads her into ministry. May she make a difference in people’s lives and may she feel tremendous satisfaction for that. I ask that You meet whatever needs she has today and may she thank You for your kindness and generosity. Amen.

Dear Father, a school board in Delaware has proposed a regulation that would allow children as young as five years old to choose the race and gender they desire to be associated with in school. The child will be able to make that choice under the guidance of school counselors without the knowledge or influence of the child’s parents. The proponents for this regulation believe it will create a safe place at school for young children to express their true identities even when their parents ban such expression in the home. Opponents believe this is an attack on the rights of parents to teach values to their children. They also believe that young children do not have wisdom and understanding and it is parents alone who are in place to guide their children through such major life-altering decisions. The regulation will allow children to choose and use a name matching their preferred gender that the teachers will use in the classroom. It allows the child to use the bathrooms and locker rooms of their own choice. All of this can occur without parental notification. The majority of the public is in opposition to this regulation. Experts state that there is no legal basis for the school to take this action. The Delaware Department of Education, operating as an extension of the executive branch, will make a decision in this matter. Father, it is clear that there has been attack on the traditional family in America for decades. Forces are clearly doing everything they can to stop parents from instilling traditional Judeo-Christian values in their children’s hearts and minds. Government wants to take over the business of teaching children values. Father, I pray that You will defend the family in America. Find men and women who are strong in faith, lead them to marriage, give them children, and guide them to instill godly values into their children. Protect those parents and strengthen their influence on their children. Father, this is not about cruely to children. True men and women of faith in Christ, men and women who have surrendered their lives to Him, are kind, gentle, good, self-controlled, patient, loving, and peaceful. Such parents do not abuse their children. They only seek what is best for them. Father, bless such families tonight. I ask that Your will be done with this Delaware regulation. May the Department of Education be moved by You to do what You believe is in the best interests of children. Amen.

Dear Father, President Trump received $ 30 million in donations to his presidential campaign from the National Rifle Association (NRA). He has been a vocal supporter of the NRA and the protection of the Second Amendment. However, the recent shooting in Florida has moved Trump to take a different stance on gun control. NRA opponents are looking for an expansion of background checks, an assault weapons ban, restrictions on gun purchases by young adults, and the confiscation of guns owned by those deemed to be mentally unstable. Trump made it clear he will not support the NRA desire to allow nationwide conceal and carry – individuals permitted to carry a gun in one state are automatically allowed to carry a gun in all states. Trumps words yesterday delighted the Democrats but raised alarm with Republicans and NRA lobbyists. It is believed by some that Trump’s intentions are merely political – that he is seeking to curry favor with Democrats while still being committed to the core message of the NRA. Republican leaders in Congress responded by making it clear they remain committed to the ideas to NRA objectives to arm teachers and to eliminate gun-free zones (many of the attacks have taken place in gun-free zones). Father, I believe that the true solution to the problem of violence in America is a spiritual revival. When men and women truly dedicate their lives to You, they become loving, gentle, peaceful, kind, patient, and self-controlled. Amercia needs a revival of faith in You in every town and classroom in America. You are the God who said all of Your commands can be summarized by two laws – love God with all of our heart, soul, and mind and to love our neighbors. If we obeyed Your ways, there would be no violence in schools. Father, bring about that revival. In the meantime, please give wisdom to our government leaders. If You believe an expansion of background checks is right, make that happen. If you believe we should have an assault weapons ban, make that happen. Whatever measure You believe is fitting, make that happen. However, defeat whatever measures You believe are not in the best interests of public safety. Don’t leave our lawmakers alone. Speak to them and may they hear Your voice. Amen.