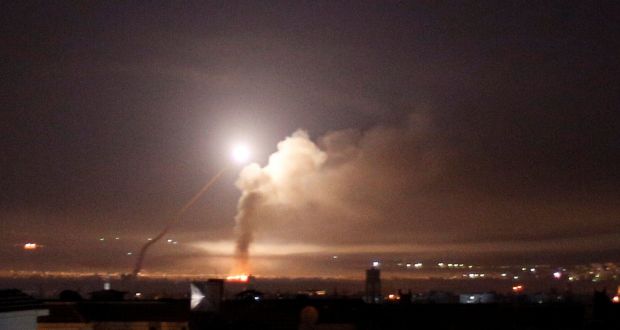 Dear Father, the Israel Defense Force has struck twenty Iranian military targets that were deployed in Syria. The attack was in response to Iranian Al Qud rocket fire, from Syrian territory, on Israeli military positions in the Golan Heights. The Israeli military said it is determined to prevent Iran from establishing a permanent presence in Syria and has a variety of military options ready to achieve their objective. Syrian air defenses attempted to defend the Iranian positions by intercepting Israeli missiles that were fired over Damascus. It has been reported that Israeli Prime Minister Benjamin Netanyahu notified Russian President Vladimir Putin before the strike. Russia is an ally of Syria. Israel has stated they do not intend any further offensive action but will respond if attacked again. Father, I ask once more than You will maintain peace in this region. I ask that men and women in leadership positions on all sides of this conflict will exercise restraint, patience, and self-control. I pray for Your protection of innocent civilians. Most importantly, I ask that Your purposes will be achieved in this conflict and that Your church will be advanced in the region. Father, lead men and women in leadership positions in the Israel Defense Force, in Hamas, and in Al Qud into personal relationships with You. Amen.

Dear Father, thank You for answering our prayer of the other day. Kim Dong Chul, Kim Hak Song and Tony Kim have returned safely to the United States. They were greeted by President Trump early in the morning at Andrews Air Force Base. Trump thanked North Korean ruler Kim Jong-Un for releasing the prisoners as a sign of North Korean intentions to work out a peace agreement. Father, bless these three men as they are reunited with their families. May they heal from the emotional trauma of their captivity and may they bond with their loved ones. Lead each one of them into a deeper relationship with You and give all three of them the opportunity to share their testimonies of Your grace with others. I also ask that You will bless the upcoming peace talks between North Korea and the United States. Amen.

Dear Father, as we prayed about the other day, John McCain is no fan of President Donald Trump. We have now learned that it was McCain who delivered the disputed “Steele Dossier” to former F.B.I. Director James Comey. It has been reported that former British spy Christopher Steele, who was hired by Fusion GPS, the firm that was employed by both Democratic operatives and “Never Trump” conservatives, to dig up compromising information on then Presidential candidate Donald Trump, turned the dossier over to John McCain. The dossier alleged a long list of immoral, unethical, and perhaps illegal actions by Trump. McCain, who has been labeled by some conservatives as a “RINO” (Republican in name only), was eager to politically discredit Trump, a man who McCain considers to be dangerous for America. He has been quoted as saying that anyone who disagrees with his actions “can go to hell.” Father, I ask again for John McCain to be freed from bitterness he has for Trump. I ask that he will have a life changing experience with You before he passes from this life. May that experience give him peace and joy in his heart. I thank You for his service to our country and for his survival of indescribable hardship in the North Vietnamese prisoner of war camp. Amen.

Dear Father, the World Health Organization has reported there is another Ebola outbreak in the Democratic Republic of the Congo. Ebola hemorrhagic fever, which is highly contagious through contact with body fluids, is a virus that leads not only to the dysfunction of key internal organs but also to serious internal bleeding. The virus kills between 25 to 90 percent of patients. Twenty-one people have been reported to have symptoms of Ebola and seventeen have died. Health officials are concerned that there are cases in a port city, opening the possibility that infected individuals may travel by boat on the Congo River to Kinshasa, Brazzaville, or Bangui. Those cities combined have an estimated population of 12.4 million people. Plans are underway to vaccinate the population to contain the outbreak as well as to safeguard against infected patients traveling by boat. Father, I ask that You will stop the spread of Ebola. May the measures health organizations are taking effectively control the spread of this horrific virus. I pray for Your mercy and grace on any victims who are suffering this hour. Give them one more hearing of the gospel before their demise and make their hearts receptive to it. I also pray that You will heal patients and return them to normal life. May those people praise and thank You for Your compassion and mercy. Father, may Your church play a vital role in this crisis, not only fighting the virus but also attending to the needs of the sick. Amen.

Dear Father, Gina Haspel, 61, has been nominated by President Trump to be the next Director of the Central Intelligence Agency. She has been the Acting Director since April 26, 2018 when former Director Mike Pompeo resigned to become the U.S. Secretary of State. If confirmed, she will become the first female CIA Director. In her days as a CIA operative, she was stationed in various locations around the world. She played key roles in the CIA response to the 9/11 attack by Al-Qaeda. This led to her being promoted into positions in counter terrorism in Washington D.C. and into station chief leadership roles in London and New York. She continued to rise through the ranks of the spy organization, being promoted to a role where she directed covert operations around the globe. This led to her appointment by President Trump as the Deputy Director in February 2017. She has been praised for the quality of her work. However, she has also been criticized for her authorization of the use of torture techniques, especially against suspected Al-Qaeda terrorists. Gina, who is divorced and has no children, has supporters and detractors in both the Republican and Democratic parties. Father, may Your will be done with her nomination. If she is the right person for the job, have her nomination be confirmed with bi-partisanship in Congress. If she is not the right person for the job, orchestrate events so the man or woman of your chosing will be confirmed into the position. Father, give her wisdom and courage to do a job that is pleasing to You. May she look to You for direction and wisdom. Surround her with godly advisors and friends. May her actions directly lead to the protection of U.S. citizens against foreign threats. Father, help her to find methods of interrogation that are most effective and that also reflect the respect for human life and that each person, even a terrorist, is made in the image of God. Meet her personal needs today and attend to her anxieties and insecurities. Amen.

Dear Father, Kiyaunta Goodwin is a 6’7″, 370-pound, eighth grader in Louisville, KY. He is already larger than most NFL linemen. Doctors expect him to grow to over 7′ tall, perhaps as tall as 7’10”. He has already received five verbal college scholarship offers. Kiyaunta plays football but is said to be concerned about hurting his much smaller opponents and teammates. He also has said he wants to go to college and get a degree. Father, I am concerned for this boy. I am concerned for his health as his size and weight is not at all normal for a child his age. Give him a long lifespan wherein he can serve his neighbors in need. Protect him from injury. Protect him from injuring smaller children he competes against. Protect him from college and professional football recruiters who only see him as a means to make money. Lead him to the right college and lead him to the completion of his college coursework and his enjoyment of earning a college diploma circa 2026. Father, I also pray for his walk with You. Lead him into a personal relationship with You. Transform his heart and mind, giving him wisdom beyond his ears. Make him into a giant of faith and good character that matches his phsyical appearance. Amen.