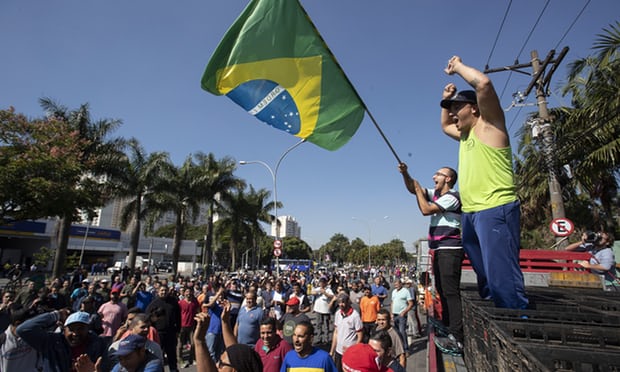 Photo by Sebastiao Moreira/EPA , The Guardian

Dear Father, many Brazilians are calling for military intervention to end a 10-day-old trucker’s strike in the South American country. The strike, which was begun as a protest to rising gas prices, is hurting the economy. Protestors have expanded the protest to include health care, education, roads, crime, and corruption. President Michel Temer, a conservative who fell into the position after Dilma Rousseff was removed from the office, has been under investigation for his own corruption. Charged with crimes, Temer’s approval rating fell to only 7% in 2017. An estimated 20% of Brazilians have responded to this political crisis by calling for the return to military control of Brazil. The military, led by Ernesto Geisel, last ruled between 1964 and 1985. The military, though it restricted individual rights, had the favor of the U.S. government because the military was anti-communist. Presidential candidate Jair Bolsonaro, a member of the Social Liberal Party, has said he will fill his cabinet with military generals. Father, we ask that You will resolve this strike, and get the trucks moving again, for the sake of the innocent people of Brazil who are suffering from key shortages. Move in the hearts and minds of influential people and lead them to negotiate a compromise and a resolution to this crisis. Bring into power the government whose actions will most effectively advance Your church in Brazil. For the sake of Your church in that country, I ask for a peaceful transition to a new government. Amen.

Dear Father, Elizabeth Warren is the senior United States Senator from Massachusetts. A well-known scholar in bankruptcy law, she has been in office since 2012. Elizabeth is a leading progressive voice in the Democratic Party and many believe she may be the party’s candidate for President of the United States in 2020. Her recently published book, “This Fight is Our Fight: The battle to save America’s middle class”, can be considered a policy statement for an upcoming presidential campaign. She is in the news today because she, in a recent interview, appeared to compliment the leaders of China for their ability to rally the “whole of government” around their policies. In other words, it appears Elizabeth was complimenting a one-party-rules-all form of government where there is no opposition at the local or national level. Father, we take the opportunity of Elizabeth Warren being mentioned in the news to bring her before You. Father, You created her for Your purposes. You love her. You desire a personal relationship with her. You desire to use her to advance Your Kingdom. Father, work in her life so that she will one day encounter the love of Christ in a truly life-changing way. Transform her heart and mind and align it with Your will. Use her to advance the mission of Your church, not only in Massachusetts but also across the United States. Bless her this day. Meet her needs. Answer her prayers in such a manner that she is compelled to thank You for Your goodness. Amen.

Dear Father, after years of suffering from corruption in government, it has been reported that 79% of Mexicans desire a change. Andres Manuel Lopez Obrador, from the National Regeneration Movement, a left-wing political party in Mexico, is dominating the polls for the upcoming July 1, 2018 presidential election. He is receiving 52% of the vote and his numbers are improving. Ricardo Anaya Cortés, who leads the National Action Party, a right of center party, has 26% of the vote. Mexico has been dominated of late by the center-right Institutional Revolutionary Party. The party controls many of the municipal, state, and national offices, including the office of unpopular President Peña Nieto. Jose Antonio Meade is the current candidate for this party but he only has 19% of the vote in the latest polls. Father, we ask that same thing for Mexico that we asked for Brazil. Put into office in Mexico the government whose actions will most effectively advance Your church in Mexico. May Your church blossom in Mexico in the coming years because of the results of the upcoming election. I ask that You will work in the lives of Andres Manuel Lopez Obrador, Ricarod Anaya Cortés, and Jose Antonio Meade in such a way that each of these men end up placing their faith in Jesus Christ. May their transformed hearts and minds influence many other leaders in Mexican society. Amen.

Dear Father, Channing Dungey is the current President of ABC Entertainment. In 2016 she became the first black American president of any major broadcast television network. Dungey, the wife of Scott Power and the mother of an adopted daughter, is in the news today because of her decision, supported by her bosses at Disney, to cancel the very popular television show “Roseanne”. The cancellation was in response to Roseanne Carr’s recent racist tweet. Father, You have created Channing. You gave her life. You desire a personal relationship with her. You desire to use her talents and skills and her influence to advance the cause of Your church. I ask that to happen. May Channing have a personal encounter with You that so transforms her heart and mind that she longs to advance the cause of Your church throughout America. Give her wisdom today. Give her a heart that longs to connect with You. Give her plenty of reasons to thank You for Your goodness in her life. Bless her today with a new spiritual life coming her way. Amen.