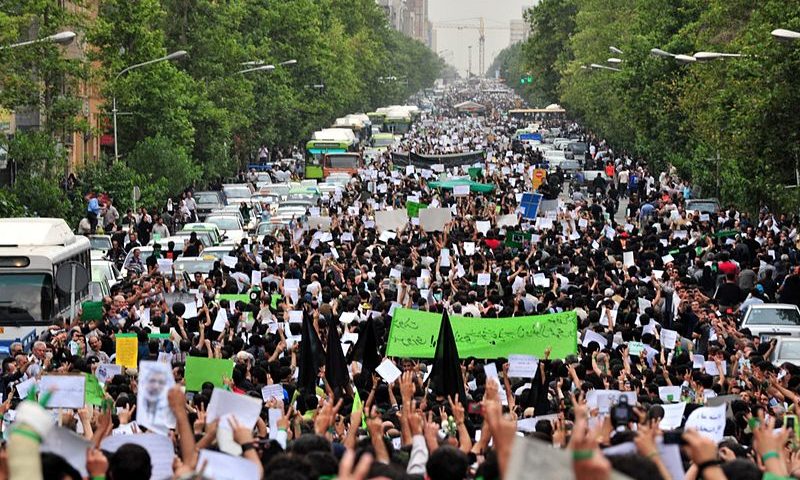 This photo is of protests in Iran in 2009

The Passing of Zackari Parrish

Dear Father, Officer Zackari Parrish of the Douglas County Sheriff’s Office was killed Sunday morning in Highlands Ranch, Colorado. He was shot by Matthew Riehl who ambushed the five officers who responded at daybreak to a disturbance in his apartment. After an exchange of bullets, Riehl, who is said to have had bitterness regarding an incident with the police, was dead and the other four officers were wounded. Father, I ask for Your abundant compassion for Zackari’s widow Gracie Parrish and their two daughters. There is much grief and heartache in this family. Please pour comfort into their lives, especially comfort from Your church. Meet their every need. Protect them from harm. Carry them through the grief. May the mother and two girls recover from this nightmare and be stronger in heart, soul, and mind because of it. Father, turn this horror into something good as each of these three ladies end up touching many lives, speaking of the amazing love of God to all who will hear their story. I also pray the same for the friends and extended family of Zackari Parish. I pray for your blessings on Deputy Mike Doyle, Deputy Taylor Davis, Deputy Jeffrey Pelle, and Officer Tom O’Donnell. May each of them credit Your love and grace for helping them to recover physically and emotionally from this shooting. Amen.

Dear Father, five American hostages were released from detention in Iran. They were released on the same day Iran received $ 400 million in cash from the Obama Administration. It has been reported that the payment was legitimate. It was related to a 35-year-old weapons deal. However, others believe it was a ransom, payment for the release of the hostages. Regardless, the economy has not improved in Iran. Many young people are struggling financially. They believe that the $ 400 million was not spent internally but was sent to Assad in Syria, Hezbollah, and Hamas. Many young women are also angry with their continued oppression by the conservative Islamic government. These were the seeds that sparked protests against the government in Tehran last Thursday. Six days later, 21 people have been killed and over 450 people have been arrested, threatened with execution. As the government takes a hardline on all protestors, news has spread around the country and more protests have resulted. The government has charged the US, Britian, and Saudi Arabia for sparking these prtests. Father, I ask that Your will be done in this crisis. May the end result of all of this upheaval be the advancement of Your church in Iran. May many of the young people who protest find strength and comfort in a geunine and vibrant relationship with You. I ask that You will protect each and every person who fights against injustice. I pray Father for You to provide for the poor and hungry in Iran. I do ask that the women in Iran will enjoy the same basic human rights as men enjoy. Father, do something incredibly wonderful through the unrest in Iran. Amen.

Dear Father, Steven Kologi, Linda Kologi, Brittany Kologi, and Mary Ann Schulz were killed New Year’s Eve in their Long Branch, NJ home. The shooter was Steve and Linda’s son Scott Kologi. His brother Steven Kologi Jr. and his grandfather Adrian Kologi were able to escape from the home. Father, it has been reported that the shooter has struggled with mental health issues. It has also been reported that his surviving brother has spoken of the goodness of his deceased parents. I don’t know what led to this but I do know it is a tragedy. Father, I ask for Your abundant grace and mercy to be on Steven and Adrian. Be very present with them as they grieve. Comfort them. Lead them to a deeper relationship with You where they find peace and even joy. Help them to recover emotionally and to grow spiritually from the trauma. I ask the same for the extended circle of family and friends of all the victims. Father, may there be inspiring testimonies of Your goodness that will soon be told in connection with this horrific crime. Father, I pray for mercy for Scott. Lead him to godly remorse that leads to repentance. May he become a testimony of a life that was transformed by the forgiveness of Jesus Christ. Amen.