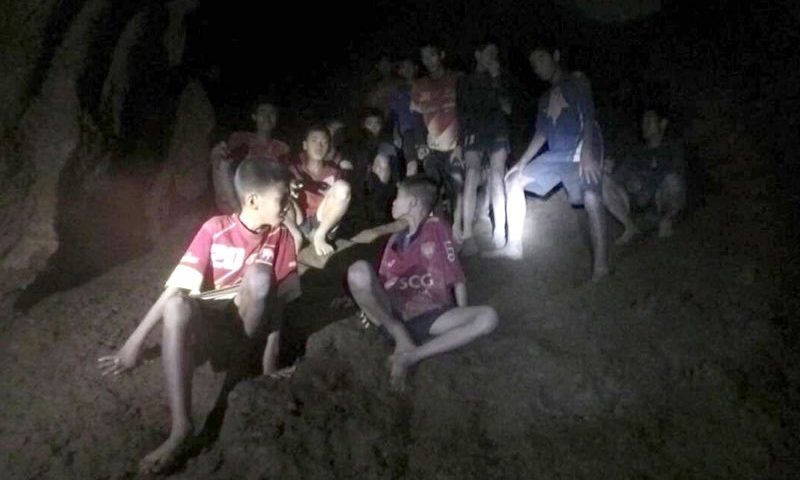 Dear Father, twelve boys, aged 11-16, and their 25-year-old soccer coach are trapped in a cave in Chiang Rai, Northern Thailand. The soccer coach led the team into the caves after soccer practice on June 23rd. However, heavy rains in the region caused part of their exit route inside the cave to flood while they were still inside. No word was heard from the coach or the boys until July 2 when divers found them alive. The problem remains – how to get the boys out of the cave. Only experienced elite navy divers were able to navigate the treacherous flooded narrow caves in the dark to get to them. It has been reported that none of the boys can swim, let alone accomplish such an extraordinary diving accomplishment. Authorities are pumping 2,600 gallons of water out of the cave every hour. However, with more water coming into the cave, the pumping has hardly decreased the water level at all. Long term prospects for their rescue look grim as both drilling through thousands of feet of rock and waiting for the rainy season to end in October are not feasible approaches. Supply lines have been setup to get the victims food and water. A telephone line will be inserted through the water so the victims can speak to their families. Father, these boys need You to rescue them.  They need You to do only what You can do.  Father, do something miraculous to free them.  Have the waters recede unexpectedly, allowing the boys to walk on dry ground or wade through the water to safety.  Give rescuers a new idea they haven’t thought of that will work to free the boys.  Give the boys a supernatural ability to dive to safety.  Father, I ask that You will protect each of these boys lives as well as the life of their coach.  Just as importantly, I pray that You are working in their hearts and minds even this very hour, preparing their hearts to surrender their lives to You.  May their calls out to You for help lead to their spiritual transformation.  May one or more of the boys have a dynamic testimony of Your love in the months and years to come that inspires many others to place their faith in You.  Father, comfort their loved ones who are afraid.  May Your church show the love of God to them.  Father, do miracles in this situation. Amen.

Dear Father, the United Nations Security Council (UNSC) was created in 1946 to maintain international peace and security. The council’s purpose is to encourage countries in conflict to settle their differences peacefully. They use the tools of diplomacy, sanctions, and, if necessary, military intervention to end the threat of war. The UNSC has approved of military intervention in conflicts in Kuwait, Namibia, Cambodia, Bosnia, Rwanda, Somalia, Sudan, and the Democractic Republic of Congo. The council is currently comprised of representatives from 5 permanent countries (United States, United Kingdom, Russia, China, and France) and 10 non-permanent members (Bolivia, Côte d’Ivoire, Equatorial Guinea, Ethiopia, Kazakhstan, Kuwait, Netherlands, Peru, Poland, and Sweden). The UNSC is in the news today after U2 singer Bono spoke on behalf of Ireland’s application to join the council in 2021-2022. Bono spoke of his concerns that international organizations such as the United Nations, NATO, and the European Union are at risk with the growing tide of nationalism across the world.  Father, I simply ask today that You have Your way with the UN Security Council.  May it serve Your objectives and Your purposes.  May the council’s decisions and actions advance the cause of Your church.  Lead onto the council the countries that You want to be involved in it.  If You want it to function effectively, may it truly reduce conflict and make international relations more secure.  Amen.

Dear Father, Scott Pruitt is the Environmental Protection Agency Administrator. Formerly the Attorney General of Oklahoma, Scott, a Republican, is politically conservative and the recipient of support from the fossil fuel industry. He discredits man’s responsbility for global warming. He is under investigation for questionable management practices by the Government Accounting Office, the EPA Inspector General, the Office of Management and Budget, the US Office of Special Council, and two House of Representatives committees. There is a growing movement of politicians, including conservatives, who are calling for his resignation. He is in the news today because he was confronted by a citizen when he was out to dinner in Washington DC.  Father, I’m not aware of Scott’s walk with You.  Regardless, I ask that the controversies he is facing will lead him to turn his life over to You.  May his faith increase.  May his heart and mind be spiritually transformed.  Give him a testimony that changes lives for Your sake.  Father, if You want him to function in this role and he is innocent of the allegations against him, give him success.  End the controversies and empower his work as the EPA administrator.  However, if You have cause for him to be removed from office, may the investigations against him lead to that result. May Your will be done. Amen.

Dear Father, a tourist boat, with ten American passengers and two crew members, blew up in the Bahamas this past weekend. The blast killed Maleka Jackson, 39, and seriously injured her husband, Tiran. Stephanie Schaffer, 22, a dancer from Vermont, lost both of her legs, broke both of her arms and a wrist, fractured her spine, and damaged her kidney, spleen, and liver. She is currently in a medically induced coma. Her mother Stacey was also injured. Her injuries include a fractured lower right leg, a shattered left ankle, a fractured right wrist, and broken ribs. Her sister Brooke and step-dad Paul escaped with only minor injuries. Haiden Jones, Kyle Ackerman, Sheila Jones, and John Inman also were injured in the blast.  Father, pour out Your mercy, compassion, love, and grace into the body of Stephanie Schaffer even this very moment.  Her body has experienced severe trauma.  Thankfully, she is still with us.  Father, heal her.  Ease her pain and discomfort.  Restore her internal organs to full functionality.  Heal her spine and her wrist.  Father, may she wake up at the right time from the medically-induced coma.  When she does, be present with her as she learns about her lost legs.  Comfort her.  Surround her with the incredible love and support of others.  Give her the emotional and physical strength to move on in life.  May she become an example that we can overcome anything by the power of the love of God.  Father, give her a dynamic testimony of Your love that inspires thousands.  I also ask for You to attend to her mother as well as all who were injured in this blast.  I ask for the same things for all of them I have asked for about Stephanie.  I also ask that You pour out Your love to the family and friends of Maleka.  Comfort them.  Show them all how much You love them.  Father, turn this catastrophe into a blessing for many. Amen.

Dear Father, Angela Ponce, a trans-woman, has won the title of Miss Universe in Spain. It is the first time in history a person born a male will represent a country in this women’s international beauty contest. Trans-women won the right to compete in such competitions when trans-woman Jenna Talackova, with the help of famous women’s rights attorney Gloria Allread, won a legal battle in 2012 to compete in the Miss Universe Canada pageant. Angela Ponce has stated that her victory in the Miss Universe competition will be a victory for all who stand for inclusion, respect, and diversity.  Father, the issue of transgender rights is politically explosive.  There are many who would pray for Angela not to win the competition against women who have been female since birth.  There are also those who would pray that Angela does win the competition to advance the transgender cause and to send a message that anyone can be whomever they want to be.  Father, I ask for three things with respect to her involvement in the competition. First, may Your will be done.  Act in this contest in such a way that Your truth is victorious.  Second, cause people to celebrate Your original design for male and female genders.  Thirdly, do whatever it takes to lead Angela into a personal relationship with You.  Regardless of how Angela presents herself on the outside, I ask that You will change her heart in the inside.  Like every one of us, Angela needs You.  Like every one of us, Angela needs to be forgiven for rebellion from You.  Like everyone of us, Angela needs to trust in Jesus Christ for forgiveness and salvation.  Father, bring this about in Angela’s life.  Give Angela many reasons to celebrate Your goodness and love. Amen.