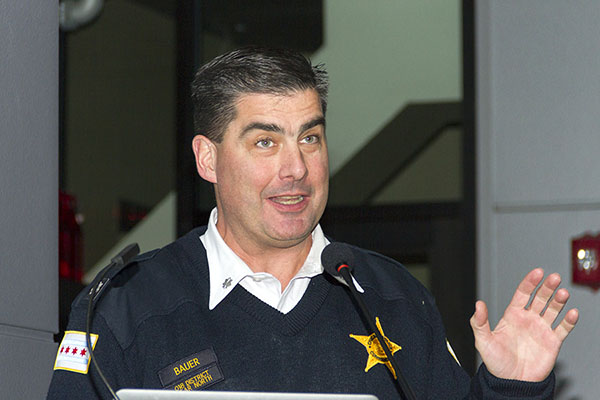 Dear Father, Joy Behar is a co-host of the popular ABC daytime talk show called The View. She was in the news yesterday for mocking the faith of Vice President Pence, implying that Christians have a “mental illness”. Father, a man named Saul used to mock Christ as well. I ask that You do a similar transformation of Joy’s heart and mind. May she experience the full measure of the love, grace, and compassion of God. I ask that she will experience the astonishing love of those who have dedicated their lives to Your honor and glory. Father, may she share her own testimony in the 2020s of her amazing Savior who talks with her too. In the meantime, I ask for your grace on her and her family. May whatever causes Joy concern this day lead her to a place where she finds true peace and joy in You. Meet their needs and protect them from harm. Amen.

Dear Father, Commander Paul Bauer of the 18th District of the Chicago Police Department was murdered yesterday in the Thompson Center in downtown Chicago. He was off-duty when he heard the call that a suspect was fleeing arrest and was in his vacinity. A 31-year veteran, Commander Bauer confronted the suspect in a stairwell. The suspect shot the officer several times. Father, I ask for Your grace and mercy on his family and friends who grieve this very hour. Please pour out Your mercy and grace upon them. Walk with them through this horrific pain. Comfort them. Help them to get done all that they need to do for his funeral. Surround them with Your church, empowering Your people to be the hands, arms, feet, and shoulders of Your love. Lead many to lift up in prayer those who grieve. I pray for justice for Commander Bauer. May his murderer be caught and may justice be victorious in this case. However, I ask that the murderer will one day turn his or her life over to You and become another dramatic example of the power of God to change hearts and minds. Amen.

Dear Father, Abigail Williams, 13, and Liberty German, 14 disappeared on February 13, 2017 after they were dropped off at the Delphi Historical Trails in Delphi, IN. Their bodies were located the next day about a half mile away from where they were last scene. There was a photo on one of the girl’s phones of a man they encountered in the wooded area. There was also an audio clip of a male voice saying “Down the hill” on one of the phones. However, no suspect has been charged with the crimes. Father, what a horrendous ordeal for the families of these girls. Not only have they had to deal with the loss of their children but they’ve also had to wait for justice to be served. The person who committed these crimes is apparently still on the loose. Father, I ask that no other child is hurt by this individual. I pray that the police will apprehend the person and justice will be served. I ask that You pour Your kindness, mercy, and compassion into the lives of every individual in both families today. Comfort them. Give them strength. Give them hope. I pray that the horrific nightmare will lead people within the family to enjoy a deeper and more fulfilling relationship with You. Father, if the girl’s killer(s) is still at large, give them a great sense of remorse today, a remorse that leads to confession, surrender, conviction, and the transformation of their heart and mind. Amen.

Dear Father, two homeless have been killed and another injured in the last two weeks in Las Vegas, NV. Apparently an individual is shooting homeless people while they sleep. With around 7,000 homeless on the streets of Las Vegas, 67% who have no shelter, anxiety and fear is sweeping through the city. Father, I ask that the individual(s) will be apprehended, even today. Give the police the break they need that leads to an arrest of the person who has committed these crimes. I ask that the situation will lead many of the homeless, who have been reluctant to seek help, to connect with faith-based ministries. May those ministries share the love of God and may many in the homeless community come to faith in Christ. I ask that this situation will also increase the awareness of the plight of the homeless and more of Your people in the Las Vegas area will volunteer their time to help get people off the streets and into stable living situations. Amen.

Dear Father, Johnny Weir, 33, is an American figure skater, fashion designer, and television commentator. The southeastern Pennsylvania native has competed in two Olympics, won several bronze medals in various competitions, and was thre U.S. national champion between 2004-2006. He is currently a commentator, along with Tara Lipinsky, of the figure skating competitions in the 2018 Winter Olympics. Mr. Weir is an activist in the LGBTQ community and he is married Victor Voronov in 2011. Johnny uses his platform to promote healthy lifestyles for young people and to prevent suicide by members of the LGBTQ community. Father, You created Johnny. You love him as You love every one else. You long to have a relationship with Him where You are his only true living God and he enjoys the spiritual blessings of having surrendered his life to Your leading and glory. Father, I ask that You will bring about his spiritual transformation. Plant seeds in his thoughts that he needs You. Give him a longing to discover who You really are and what You really mean to him. Father, bring into his life situations, encounters, and conversations that point him to the only thing that will ever give him the full satisfaction he longs for – You. I ask the same for his husband Victor. In the meantime, show mercy and compassion on these two men and give them many reasons to thank You. Amen.

Dear Father, Shaun is the most successful snowboarder of all-time. He won his third Olympic gold medal yesterday, a gold medal in three different Winter Olympics. Thank You for helping him to heal from a serious injury in the halfpipe that required 62 stitches to repair. Thank You also that he survived Tetralogy of Fallot, a heart condition as a newborn that had to do with the improper oxygenation of his blood. Shaun has become a wealthy celebrity due to his success and the image he has crafted in his sport. Father, he is also someone who You long to have a relationship with. You want him to walk with You, trust in You, and live a life that honors and glorifies You. I pray that Shaun will one day come to faith in Jesus Christ. May he have a testimony that inspires many people to discover Your amazing love. Give him the desire to talk to young people about character and how to live godly lives. Father, meet Shaun’s needs today, whatever they may be. Speak into his life so that he knows, without question, it is You who has given him so many good things. Amen.

Dear Father, Lizette Cuesta, 19, was found bleeding to death on Tesla Road near Livermore, a town in the suburbs of San Francisco. She had been stabbed multiple times and apparently had bled while she crawled 100 feet down the road. Prior to her demise, she identified her killers as Daniel Gross, 19, and Melissa Leonardo, 25. Before she expired, a Good Samaritan comforted her and prayed with her. Father, this world of violence is not the world You want for us. It is our rebellion from You that has led to so much pain and heartache through world history. Instead of doing things You way, like loving our neighbors, we disobey You and hate our neighbors. Father, I pray for Lizette’s family today. Comfort them. Walk with them through the grief. Meet their every need. I pray for Your blessings on the Good Samaritan, a person who You apparently led to the scene to give her final words of encouragement. In the midst of this tragedy, we can see an act of a loving God. Father, may the friends and family of Lizette come to faith in Christ. Give them hope and peace as they face the days ahead. Father, as I pray for justice for Lizette, I also pray that those who committed this crime will have remorse and will seek Your forgiveness. May they surrender their lives to You and experience the transformation of their hearts. Amen.