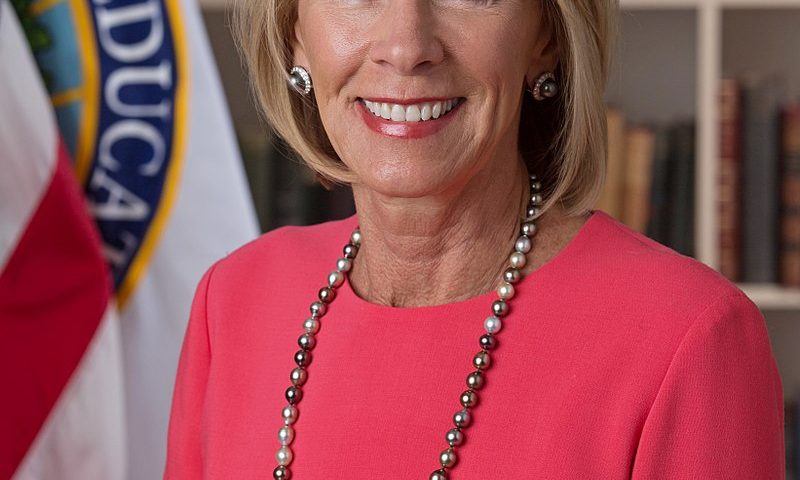 Dear Father, Betsy DeVos is the eleventh U.S. Secretary of Education. She was nominated by President Donald Trump and confirmed by the Senate in a partisan 51-50 vote on February 7, 2017. Betsy is a proponent of school choice, school vouchers, and charter schools. In other words, public school teacher unions, a major backer of the Democratic party, are not her friends. Betsy is also a born-again Christian, making clear to the public that she has placed her faith in Jesus Christ. She has stated that she sees her role in public service as an opportunity to build Your Kingdom. Such declarations have created a firestorm of resentment from secularists who believe fervently in the separation of church and state. Additionally, Betsy, whose father was himself a successful businessman, is the wife of Dick DeVos, the former CEO of Amway. Her father-in-law was the founder of the Prince Corporation. The DeVos family is one of the hundred richest families in America. Many consider that her affluence makes her unqualified to understand the needs of lower income students. Therefore, Betsy has received a great deal of criticism. Protestors have disrupted her speeches and audiences have literally turned their backs on her. She is deeply resented and disliked by a large percentage of the U.S. population. Father, I ask for Your blessings on her today. Strengthen her faith in You. Help her to feel comforted by Your presence in her life. Give her peace and joy despite the opposition against her. Keep her and her loved ones safe. Give her wisdom and insight. Help her to not only understand the perspectives of her critics but also to build new connections of trust with them. Help her to discover and promote education solutions that will appeal to teacher unions and to activists who represent the inner city poor. Father, I ask that her administration will strengthen the effectiveness of education in America and that our students will become more educated and prepared for success in their careers thanks to her initiatives. Amen.

Dear Father, Kyle Korver, 37, is a professional all-star basketball player playing for the Cleveland Cavaliers in the NBA. He holds the record for the highest three-point percentage in a season with 53.6%. He has also played for the Philadelphia 76ers, Utah Jazz, Chicago Bulls, and Atlanta Hawks. He is the father of three children, a daughter and two sons. He is an outspoken Christian who is committed to make a difference in the lives of those less fortunate than himself. He has worked to serve underprivileged children, the homeless, and the needs of the poor who live overseas. He is in the news today because his 27-year-old brother Kirk has succumbed to an undisclosed illness. The team is giving Kyle time off to mourn the passing of his brother. Father, I ask that You will comfort Kyle and his family today. Walk with them through their grief. May the loss of Kirk strengthen the family’s faith. May Kyle come out of this season of grief even more committed to sharing his testimony with others and to volunteering in his community. Father, give Kyle an even stronger testimony in the NBA and may other players soften their hearts towards You because of his character. Amen.

Dear Father, Blaine Gaskill is a St. Mary’s County (Maryland) Sheriff’s Office deputy who yesterday shot and killed Austin Wyatt Rollins, 17, after the teen had shot two students at Great Mills High School. It has been reported that Mr. Gaskill took out the school shooter within one minute of the shooter’s first shot. Mr. Gaskill is considered a hero today. Two students were shot by Austin. A male student was shot in the leg and is reported to be in stable condition. A female victim has life-threatening injuries and is in critical condition. Father, I ask that You will spare the life of the female victim. Restore her to health. Lead her to full recovery from her injuries. I pray that You will be present with her friends and family as they hold a vigil by her beside. Hear their prayers. Use this tragedy to draw them all into a closer walk with You. I ask that this female victim will one day become a woman of strong faith whose testimony inspires others to turn their lives over to You. I pray for the male student to fully recover from his injuries. Bless his life. Use his story for Your purposes. I pray that both students will fully recover from the emotional trauma of the shooting. I ask You to be with the family and friends of the shooter Austin Wyatt Rollins. They not only grieve his death but they also grieve his decision to shoot students in the high school. They have a different set of needs. I ask that You will bless them and lead them into a deeper relationship with You. Give them peace of mind. Father, I thank You for Blaine Gaskill’s courageous work on the high school campus yesterday. He may have saved more lives and prevented more injuries. May the lives he saved serve You and enjoy their own walks with You. I ask that this experience leads Blaine into a deeply fulfilling personal relationship with You. Give him ample opportunities to encounter Your love for him and may he surrender his life to You, enjoying the full spiritual benefits of that decision. Amen.

Dear Father, Justine Ruszczyk Damond was a 40-year-old Australian native living in Minneapolis, MN on July 15, 2017. A personal coach, she had moved to the U.S. in expectation to marry her American boyfriend in August of 2017. She had taken the step to change her last name in expectation of her upcoming marriage. She had become a citizen of the U.S. On that day, she heard a disturbance in the alley behind her house. She believed a woman was being sexually attacked. She called the police. A police car arrived on scene. Officer Mohamed Noor was sitting in the passenger seat of the police car. Officer Noor had been celebrated by the city as one of the first Somalian police officers. Justine approached the police car wearing her pajamas. Officer Noor, perhaps thinking Justine was in some manner threatening the police, fatally shot Justine, much to the surprise of his partner. Neither officer had their body camera’s turned on. The shooting also was not recorded by the dashboard video in the police car. The public outcry about the shooting was so intense that Police Chief Janee Harteau was relieved of her command by Mayor Betsy Hodges. The city responded by mandating that all officers turn on their body cameras throughout their shifts. This decision has been challenged by police officers who believe it is unwise for conversations about tactics and strategy within a police car in route to a call be recorded. This story is in the news today because Mohamed Noor, who has since been dismissed from the police force, has been charged with third-degree murder (manslaughter). If convicted, he faces 10-15 years in prison. Father, my heart thinks about Justine’s family and former fiance. It has certainly been a difficult eight months for them. I ask that Your compassion will pour into their lives. May Your love for them be so apparent that it leads them to commit their lives to You. Comfort them. Help them heal. Father, may Mohammed’s arrest be the spark that leads him to discover Your deep love for him. Transform his heart and mind. Turn him into a man of God. If he is convicted, use his prison experience to strengthen his faith in You. Protect him, a former police officer, as he will be a target in the prison system. I ask that in the 2030s he will have a vibrant ministry leading others to faith in Christ. Amen.